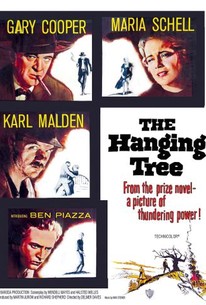 Doc Frail (Gary Cooper) is a silent drifter who rides into a lawless Montana town afflicted with gold fever. In very little time, he quickly proves himself to be equally as adept with a deck of cards and a gun as he is with his medicine. He saves Rune (Ben Piazza) from a lynching, and Elizabeth (Maria Schell) , nearly dead from exposure to the elements. Both are indebted to him for his interventions on their behalf. The villain Frenchie (Karl Malden) is an evil prospector who tries to take Rune's life and Elizabeth's virtue. When gold is discovered, an angry drunken mob threatens to set fire to the town and hang Doc in the process, apparently just for fun. George C. Scott makes an appearance in the film as the religious fanatic, Grubb.

Clarence Straight
as Dealer
View All

Critic Reviews for The Hanging Tree

Daves directed in a fashion to give Coop full leash in playing his grim but sympathetic lend role.

Maria Schell and Karl Malden add some nice shades of color, but for something a bit more salacious concerning mankind's wayward nature filtered through the Gold Rush, check out Erich von Stroheim's Greed.

The microcosm Delmer Daves creates here would make Billy Wilder pause, and the final five minutes are a masterstroke of nihilism.

The Hanging Tree seems, if you go by the cast, all set to become a Top Western; but somehow has slithered.

Gary Cooper shines in one of his very last pictures, a Western directed by Delmer Daves.

Audience Reviews for The Hanging Tree

There are no featured audience reviews yet. Click the link below to see what others say about The Hanging Tree!