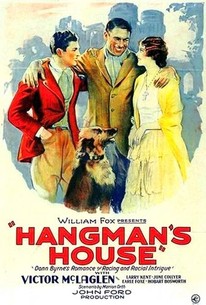 Long believed lost, this fascinating John Ford-directed silent film was rediscovered and restored in the early 1970s. Based on the 1926 novel by Donn Byrne, the film stars Hobart Bosworth as Irish "hanging judge" James O'Brien. Even on his deathbed, O'Brien cannot stop meddling in the affairs of his daughter Connaught (June Collyer), insisting that the girl marry wealthy wastrel John Darcy (Earl Foxe). Alas, Connaught despises Darcy, preferring instead the poor-but-decent Donnaugh McDonnaugh (Larry Kent). Meanwhile, Irish expatriate Hogan (Victor McLaglen) returns to the Auld Sod to avenge his family's honor by killing the caddish Darcy. One of the highlights of Hangman's House is a steeplechase sequence, predating a similar sequence in Ford's The Quiet Man by 25 years. A young, unbilled John Wayne can clearly be spotted in this scene, enthusiastically urging on his favorite horse; reportedly, Wayne also appears as a condemned prisoner in a flashback sequence.

Here is another production in which the camera-man is the real hero. His name is George Schneiderman, and he has achieved some moving pictures as interestingly beautiful as any that I have seen since Sunrise.

There are no featured reviews for Hangman's House at this time.