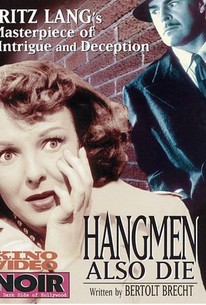 This film is set in Czechoslovakia during the Nazi occupation. Czech loyalist Brian Donlevy assassinates the vicious Gestapo leader Heydrich, then goes into hiding. Fifth columnist Gene Lockhart arranges for 400 Prague citizens to be rounded up as hostages, to be killed if Heydrich's assassin is not revealed.

George Irving
as Necval the Poet

Lester Sharpe
as Rudy, a Hostage

Charles B. Middleton
as Patriot

From a directorial standpoint this is a triumph for Fritz Lang, who succeeds with singular success in capturing the spirit of the Czech people in the face of the Nazi reign of terror.

For all of Mr. Lang's finesse, his film is too patient -- it runs well over two hours -- too ponderous to hit its stride as melodrama. Nor does it match in emotional power and conviction its heroic theme.

The two-and-a-quarter-hour film has the iconic thrust of a silent; the pro-sacrifice resistance cant has an oddly jihadist tenor today.

Superb performances throughout, while James Wong Howe's photography perfectly captures the spirit of the occupied city, where hiding places are few and far from safe.

The title makes you expect the usual raw melodrama. Actually, you see a vivid, engrossing film, with brilliant direction by Fritz Lang, and some extraordinarily fine character acting.

The atmosphere of paranoia and suspicion evoked here is as pervasive as any Lang ever created.

An effective cat-and-mouse thriller and a paean to resistance, designed to give strength to those under Nazi rule. For a propaganda movie, it's surprisingly dark and not afraid to show the human cost of resistance.

Visually the film's atmosphere is marvelously dark and oppressive due to the moody lensing of the great cinematographer James Wong Howe.

In this collaboration with playwright Bertolt Brecht, Fritz Lang's WWWII drama about the Czech defiance of the Nazis is admittedly propagandistic but is marked by a properly oppressive ambience and dark visuals courtsey of ace lenser James Wong Howe.

I find that Fritz Lang's films are often hit-or-miss, but even when they miss, they're still usually interesting failures. "Hangmen Also Die!" isn't a failure at all, but it is too long and not as tensely directed as it should have been. What could have been a riveting thriller about the Czechs getting their revenge against the Nazis ends up being kind of exciting but nonetheless forgettable. Side note: it was co-written by noted German playwright Bertolt Brecht, who seldom wrote screenplays.