Hannah and Her Sisters1986 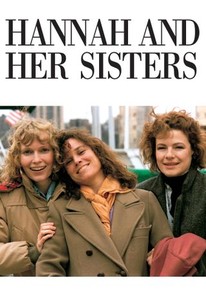 Critics Consensus: Smart, tender, and funny in equal measure, Hannah and Her Sisters is one of Woody Allen's finest films.

Critics Consensus: Smart, tender, and funny in equal measure, Hannah and Her Sisters is one of Woody Allen's finest films.

Critic Consensus: Smart, tender, and funny in equal measure, Hannah and Her Sisters is one of Woody Allen's finest films.

Hannah and Her Sisters Videos

Hannah and Her Sisters Photos

A Woody Allen Manhattan mosaic, Hannah and Her Sisters concerns the lives, loves, and infidelities among a tightly-knit artistic clan. Hannah (Mia Farrow) regularly meets with her sisters Holly (Dianne Wiest) and Lee (Barbara Hershey) to discuss the week's events. It's what they don't always tell each other that forms the film's various subplots. Hannah is married to accountant and financial planner Elliot (Michael Caine), who carries a torch for Lee, who in turn lives with pompous Soho artist Frederick (Max Von Sydow). Meanwhile, Holly, a neurotic actress and eternal loser in love, dates TV producer Mickey (Allen), who used to be married to Hannah and spends most of the film convinced that he's about to die. Appearing in supporting parts are Lloyd Nolan and Maureen O'Sullivan (Farrow's real mom), as the eternally bickering husband-and-wife acting team who are the parents of Hannah and her sisters. The film begins and ends during the family's traditional Thanksgiving dinner, filmed in Farrow's actual New York apartment. Unbilled cameos are contributed by Sam Waterston as one of Wiest's brief amours and Tony Roberts as one of Allen's friends. Hannah and Her Sisters collected Oscars for Michael Caine, Dianne Wiest, and Woody Allen's screenplay.

The 39 Steps
as Rock Band

Bobby Short
as Himself

News & Interviews for Hannah and Her Sisters

View All Hannah and Her Sisters News

Critic Reviews for Hannah and Her Sisters

Is Hannah and Her Sisters, the 14th movie written and directed by Allen, worth the wait? No.

Allen is one of the rare clowns with the gift of discovering the universal upon his own doorstep.

The marvel of Hannah and Her Sisters is just how many fully realized characters and relationships Allen is able to weave into the fabric of this extraordinarily well-written film. This script is one to be studied by aspiring filmmakers.

Perfection is boring, but boring is the very last word to describe Hannah and Her Sisters, which just may be a perfect movie.

Hannah and Her Sisters is structured ingeniously so that seemingly separate stories eventually merge in satisfying ways.

Hannah and Her Sisters is also filmmaking of consummate skill and emotional range. It encompasses brilliant comedy and almost unbearable poignance -- often in the same scene.

The finest film I've seen from the year I was born remains quite a thing indeed.

Brilliant but mature comic-drama about an imperfect family.

This gifted ensemble works hard to make Hannah and Her Sisters the best movie of the year so far, perhaps the best that Allen has ever made.

Allen`s ear for the strained marital conversation, the fury of a breakup and the tentativeness of starting a romance is impeccable.

The film weaves a rich Chekhovian mix, full of wry insights into the fragility of human emotions.

Audience Reviews for Hannah and Her Sisters

What makes this film so special and unforgettable - right there with its flawless structure, impeccable direction, three-dimensional characters and phenomenal dialogue - is how Woody Allen is won over by such a surprising amount of optimism, and the result is just perfection.

The pastiche structure of this film is complex though sometimes unsatisfyingly slow. This dysfunctional literati family struggles with passive-aggressive sororal jealousy and spousal musical chairs. The titular character is the least developed. Hannah's acting talent and togetherness is only talked about through pervasive monologues; her strengths and demons are never really shown. Nice uncredited cameo from caterpillar-browed Sam Waterston from "The Newsroom"!

It's no Bananas, but really, what is?

Woody Allen skillfully blends comedy and drama in this wonderfully observed portrait of the lives, loves, and issues of a close knit family and their significant others over the course of a couple of years. Hannah (Mia Farrow) is the oldest child of artistic parents. She's a successful, kind, and thoughtful actress, wife, and mother. She's basically the backbone of the family, who both hate and need her. Her two sisters, Holly (Dianne Wiest) and Lee (Barabra Hershey) are more aimless and resent her because of her stable and successful life, yet the rely on her for support so much that they couldn't possibly truly hate her. However, Hannah begins to realize that she's just as lost as the rest of the world when her life starts to unravel due to sibling rivalry and betrayal. This movie has some really serious dramatic moments, but they are nicely balanced out by some terrifically funny stuff involving Woody's character- a hypochondriac in the TV industry who goes through existential and spiritual crises, There's humor with some of the other characters, but the bulk comes from Woody's Mickey. This film has it all: comedy, tragedy, pain, relief, laughs, and tears. It all works wonderfully and reeks of realism and experience. Simply put, this is some truly great writing. The performances are also just terrific. The three ladies playing sisters have a great rapport together, Woody is great as usual doing his trademark shtick, Michael Caine (who, along with Wiest snagged an Oscar for his work here) is quite good as the husband to won sister who has an affair with one of the other two. Showing up in some nice supporting roles are Carrie Fisher and Max von Sydow, both of whom, despite being supporters, do a good job. I also enjoyed seeing Daniel Stern make a brief appearance, as well as Julie Kavner, who I think pretty much stole the few scenes she was in. All in all, this is just an excellent study of human relations, and ranks pretty high as some of Allen's best work. In a way, this almost felt like light opera or super high art, only not as pretentious and more accessible. Even then this won't be for everyone, but if you give it a chance, there's bound to be something here for you to enjoy. Definitely give this one a go.

Hannah and Her Sisters Quotes