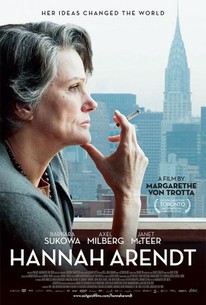 Critics Consensus: Led by a powerful performance from Barbara Sukowa, Hannah Arendt does a commendable job of dramatizing the life of a complex public figure.

Critics Consensus: Led by a powerful performance from Barbara Sukowa, Hannah Arendt does a commendable job of dramatizing the life of a complex public figure.

Critic Consensus: Led by a powerful performance from Barbara Sukowa, Hannah Arendt does a commendable job of dramatizing the life of a complex public figure.

Now Streaming: Parks and Recreation, Serenity, And More
Critics Consensus: After Earth is Lost in Space

It is an absolute treasure to see and inspires its viewers to return to the literature of this lauded thinker.

Von Trotta, however, smartly focuses on a brief, pivotal moment in Arendt's career...

This all may sound all very heavy, but it is important to also point out that Hannah Arendt is also a good movie.

Hannah Arendt is ultimately a pleasure, because Sukowa plays the most forbidding of intellectuals as a fabulous, passionate doll.

It's refreshing to find a film inspired by challenging ideas, and Von Trotta and her team are to be congratulated for bringing Arendt's story to the screen

Sukowa is a supple and brave actress; getting inside Arendt's arguments is the hardest and if the film only succeeds sometimes, that is still a major achievement. Very few films in this era would have dared.

Thoughtful, fierce and imperfect, Hannah Arendt runs a bit long, but is an inspiring slice of history that might just convince you to go out and read one of its subject's books.

Von Trotta's film is neither profound, nor radical. It belongs to that grand dramatic tradition that trivialises and sentimentalises history until all that's left is a series of generic conventions.

Philosophy must be an incredibly difficult thing to translate into film, so I give the filmmakers credit for bringing across Hannah Arendt's thinking, and that of her opponents, so clearly.

I found [Hannah Arendt] fascinating, though its lecture style may not appeal to some.

Although the movie etches a rather thin portrait of Arendt, it succeeds in humanizing her as a person, contextualizing her as a theorist, and evoking the courage she showed in airing convictions that often went against the scholarly tenor of her time.

...actors in supporting roles telegraph the controversies surrounding Arendt's personality as if they were attempting to literally touch the viewer's nose.

While the dialogue is at times repetitive and even expository, the rather elliptic plot suffers from the fact that the protagonist remains a nearly inscrutable puzzle during most of the time - but by the end when her motivations are finally made clear, it all fits perfectly into place.

A German-Jewish philosopher covers the Eichmann trial and garners fury for her reporting. It's quite rare to highlight philosophers and their work because it's difficult to raise academic concerns to the level of high drama. This film succeeds because it's a smart film for smart people -- people who can understand Arendt's concept of the "banality of evil." But it doesn't fully commit to its trust in the audience. While we get to see elements of the Eichmann trial from newsreel footage, we don't get inside the process of Arendt's observations. What about Eichmann led her to re-form how we think about morality and evil? Where does she see it, and how can the film show us her evidence? The performances are all strong in a steely-eyed, hyper-intellectual way but without much vulnerability from any of the characters. Overall, this is a strong, intelligent film.

This is one of the few movies I've watched where I read the book first. A sophisticated piece that manages to keep its intellectual subject matter fresh and appealing. My only contention is that it depicts Arendt as an impossibly faultless human being and I would've liked to see a more balanced view there.

The film is at least partially successful in showing how noted thinker Hannah Arendt(Barbara Sukowa) came to the intellectually impressive feat of formulating the theory of the 'banlity of evil,' starting with her out of curiosity more than anything else to volunteer to cover the trial of Adolf Eichmann in Israel for the New Yorker. However, the movie fails to adequately dramatize these events, with some elements lacking relevance(Although whatever gets Janet McTeer into a movie is fine with me.). For example, I'm left wondering how Heidegger(Klaus Pohl) is supposed to fit in. As a byproduct of its limited budget, the movie mostly relies on interiors which actually helps in encapsulating the hermetic lives of academics. As one, Arendt enjoys the arguments she has with other intellectuals, not realizing the huge uproar she is about to cause with her articles in the general public. Previously, the Israeli government was probably having similiar arguments about what to do when they found out where Eichmann was. By the way, this was at a time when governments would at least consider putting the enemies of state on trial. As time goes on, Hannah Arendt would be proven right when she said that nobodies are behind the evil of the world. Except, even though he would appear like a meek bureaucrat on the stand when he is simply trying to save his skin, the same could not be said of Adolf Eichmann, as he was at the infamous Wannsee Conference and therefore one of the architects of the Final Solution. Check out the documentary "The Specialist" which is comprised solely of footage from his trial and judge for yourself.