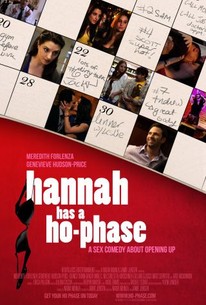 Hannah Has a Ho-Phase Photos

25-year-old HANNAH thinks she knows everything there is to know about sex and relationships; sex is something you do only when you really like someone. Only Hannah hasn't really liked someone in over a year and her uptight attitude is beginning to ruin her relationships instead of encourage them. Her best friend and roommate LESLIE can't take it anymore. Hannah needs to get laid. As a pole-dancing instructor and self-declared sexually-liberated woman, Leslie knows that Hannah's got it all wrong. She has to put herself out there (and put out) to live life and meet people. When Hannah catches her love interest swapping tongue with someone else she begins to question her own rules - but she won't tell that to Leslie. Hannah and Leslie's constant debate over what's right and wrong in the bedroom lands them in a heated argument and they end up challenging each other to switch places: Hannah must sleep with ten guys while Leslie completely abstains. Chaos and comedy ensue as both girls are determined to shatter the stereotypes they've become. Leslie picks up several new hobbies she didn't know existed, like baking and crocheting. Hannah, the eternal optimist, begins to prowl for men in places she never imagined - from the gym to dates.com. As Hannah gains a true sense of control over her "ho-phase" she forgets the very purpose of this rite of passage: to be open to real love and intimacy. This causes Hannah to completely overlook the man whose heart she's already captured: DONNY (28) a promiscuous, whip-smart co-worker. On the other hand, Leslie meets sweet and sexy SETH (30) and finds herself developing a deeper friendship than she ever thought possible with a guy. As Leslie becomes more sexually frustrated and Hannah becomes more emotionally reckless, they find it impossible to win the bet they've made without compromising what matters the most to them: their friendship.(c) Official Site

Matt Richards
as Will
View All

Critic Reviews for Hannah Has a Ho-Phase

It ought to be harder to be so simultaneously boring and offensive, but somehow the new sex comedy Hannah Has a Ho-Phasemanages both.

In the zeitgeist shadow of works with much more strongly defined voices, this slice of mock-shock has little going for it except for that great title and a few likable performances.

There are no featured reviews for Hannah Has a Ho-Phase at this time.

Hannah Has a Ho-Phase Quotes