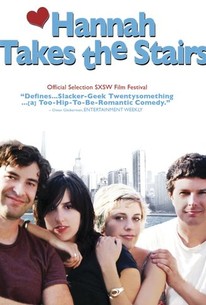 American independent filmmaker Joe Swanberg's 2007 feature Hannah Takes the Stairs concerns Hannah (Greta Gerwig), a recent college graduate who spends one long, unsatisfying summer in the Windy City attempting to achieve romantic fulfillment in a seemingly endless series of relationships. Drifting in and out of infatuation, but never quite reaching satisfaction, Hannah begins to pose an emotional threat to herself and those around her. The picture co-stars filmmakers Andrew Bujalski (Funny Ha Ha) and Todd Rohal (The Guatemalan Handshake) as well as screenwriter Kent Osborne (The SpongeBob SquarePants Movie). Gerwig co-authored the script with Osborne and Swanberg. ~ Nathan Southern, Rovi

Kevin Bewersdorf
as Guy Who Lays Down
View All

Smart and engaging, but too many meandering breeze-shooting sequences.

It's never enough to establish any sensitivity or social pertinence beyond the trifling tiffs which are playing out on screen.

There's only so much twentysomething navel-gazing one can listen to before wanting to slap some sense - and some fully formed sentences - into them all.

There is something teeth-grindingly cutesy about the whole thing, reaching epic levels of dippiness in the, ahem, nude trumpet-playing scenes. That makes it sound interesting, come to think of it, and perhaps it is.

Hannah Takes the Stairs, the latest comedy of mannerisms in the "mumblecore" style, is maddening for 60 of its 83 minutes.

The film meanders along in conversational style, encouraging improvisational realism but also the thought that maybe these middle-class characters, not quite slackers, are less interesting than they, or the director, think they are.

Less dazed and confused than mumbling and mundane, this drama focuses on social awkwardness and twentysomething blues. Skipping aimlessly from scene to scene it offers little observations and rewards low expectations.

For every revelatory moment of sharp perception there's an eternity of goofy smiles, stuttered dialogue and embarrassed glances.

Watchable independent drama from the mumblecore crowd, though it's not quite sharp enough, funny enough or insightful enough to really get off the ground and the characters are occasionally irritating.

No one involved seems to have any thoughts about why people are selfish and cruel to each other, but they're more than willing to complain about it.

Performances help raise Hannah Takes the Stairs above the realm of self-indulgent cinema to something worth seeing.

Very few of the characters were compelling enough to make the improvised, handheld, do-it-yourself style work. But Hannah is one of them.