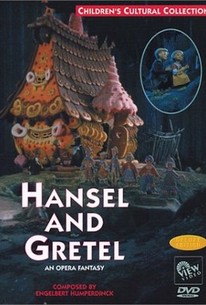 Engelbert Humperdinck's delightful opera Hansel and Gretel comes to the screen in a novel manner, courtesy of producer Michael Myerberg. This beloved tale of two children who get lost in the woods and foil a cunning, cannibalistic witch was enacted by a cast of electronically controlled puppets. The voices of the characters are provided by Anna Russell, Mildred Dunnock, Frank Rogier, and Constance Brigham, the latter playing both Hansel and Gretel. The English-language libretto was adapted for the screen by Irish-American essayist Padraic Colum. Released theatrically by RKO Radio in 1954, Hansel and Gretel was released to television four years later, where it became a Yuletide tradition in several markets.

Apollo Boys Choir
as Angels and Children
View All

Critic Reviews for Hansel and Gretel

The novelty quickly wears off.

There are no featured reviews for Hansel and Gretel at this time.