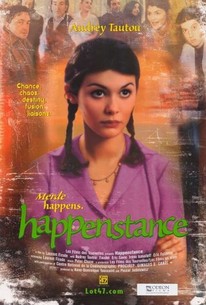 Critics Consensus: Though the plot of Happenstance is basically a gimmick, the film is a fun, light-hearted trifle.

Critics Consensus: Though the plot of Happenstance is basically a gimmick, the film is a fun, light-hearted trifle.

Critic Consensus: Though the plot of Happenstance is basically a gimmick, the film is a fun, light-hearted trifle.

After a series of short films, writer/director Laurent Firode made his feature-length debut with this tale of coincidence, chance, and fate inspired by a variation of the chaos theory, which supposes that if a butterfly beats its wings in one part of the world, it could theoretically cause a full-fledged storm thousands of miles away. Firode applies this theory to a disparate group of Parisians, opening with a young retail worker, Irene (Audrey Tautou), reading her horoscope on the train to work one morning. At the store, Irene has to deal with an elderly woman (Francoise Bertin) who wants to return a broken coffeemaker; as if that weren't enough, the dissatisfied octogenarian consumer has to put up with her impudent grandson, Luc (Eric Feldman). Amidst all the seemingly unrelated human activities in the film, cockroaches, bird droppings, and changes in the weather all conspire to bring the characters together -- or drive them apart, as the case may be.

Antoine Coesens
as The Clochard

Saïd Serrari
as The Pickpocket

Gilbert Robin
as The Destiny Man

Husky Kihal
as The Magazine Owner

Nor-eddin Abboud
as The S.A.V. Salesman

Felicity Wouassi
as The Vigilant

Abbdessamad Chahidi
as The Clandestine Moroccan

Sylvie Herbert
as The Nurse

Michael Baladi
as The Waiter from the Coffee Shop

Louise Vincent
as The Gitane

Discreet, delicate and humane: a sweet butterfly of a movie that beats up a cinematic windstorm of life.

A mild but engaging romance, the charms of which come at you sideways.

It strives mightily to convince us that the Chaos Theory rules us, yet everything in it feels preordained.

The idea, after all, is that people don't have free will, and who wants to watch puppets, however adorable?

Each little action, as we see, causes something bigger to happen, resulting in not exactly a tidal wave, but a happy sense of cinematic pleasure.

It's a delight to watch the plot unfold, and to become aware of how a small, random action by one person can impact the life of another.

A gimmicky yet remarkably spry and overall enjoyable tapestry about the 'random interconnectedness' of life in general and romance in particular.

It's charmless and as against the gentle grain of the New Wave French comedies of the past few years as it's conceivable to be.

Sheer mechanism propels Happenstance, but the numerous characters and storylines flow and converge in a gracefully unpredictable and witty manner.

It's silly and slight, but not too sweet, so go take a chance.

Firode comes up with some clever and amusing situations, but his characters are so glum and unlikable it just isn't a whole lot of fun to spend time with then.

Though fancifully constructed, Happenstance is principally the visualization of a concept, and in the end, more of a moving board game than a movie.

I didn't get the feel that Irene was a hopeless romantic, or believed in horoscopes, just that those circumstances where part of the story. It was sweet, and the characters were humorous.

Fun to see how it all ties in to itself. It's neat to think about how most of the people you come into contact with have contacts that affect you later and vise versa.