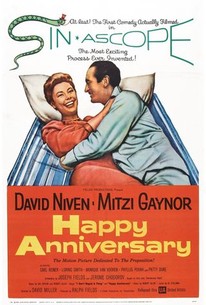 A comedy with songs has the Walter's celebrating their 13th wedding anniversary. Chris (David Niven) and Alice (Mitzi Gaynor) are a happily married couple with two children. After too many drinks at the anniversary dinner, Chris reveals to his in-laws that he and Alice engaged in pre-marital sex in the year previous to their marriage. Upon returning home, Chris and Alice argue over his inebriated confession in front of her parents, which is overheard by the children. Thinking their parents will divorce, daughter Debbie (Patti Duke) reveals the argument on a popularly televised kid's show.

When this tedium has reached its happy ending one's relief is mixed with pity for the admirable Mr. Niven. Hard as he tries and deftly as he delivers his lines he remains a victim of mis-casting.

There are no featured reviews for Happy Anniversary at this time.