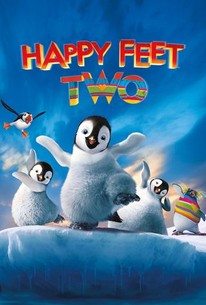 Critics Consensus: The animation is as eye-popping as ever, but Happy Feet Two's narrative is too noisily incoherent to recapture the Oscar-winning charm of its predecessor.

Critics Consensus: The animation is as eye-popping as ever, but Happy Feet Two's narrative is too noisily incoherent to recapture the Oscar-winning charm of its predecessor.

Critic Consensus: The animation is as eye-popping as ever, but Happy Feet Two's narrative is too noisily incoherent to recapture the Oscar-winning charm of its predecessor.

Happy Feet Two returns audiences to the magnificent landscape of Antarctica in superb 3D. Mumble, The Master of Tap, has a problem because his tiny son, Erik, is choreo-phobic. Reluctant to dance, Erik runs away and encounters The Mighty Sven-a penguin who can fly! Mumble has no hope of competing with this charismatic new role model. But things get worse when the world is shaken by powerful forces. Erik learns of his father's "guts and grit" as Mumble brings together the penguin nations and all manner of fabulous creatures-from tiny Krill to giant Elephant Seals-to put things right. -- (C) Warner Bros

Hank Azaria
as The Mighty Sven

Brad Pitt
as Will the Krill

Matt Damon
as Bill the Krill

Hugo Weaving
as Noah the Elder

Richard Carter
as Bryan the Beachmaster

Anthony LaPaglia
as The Alpha Skua

But I liked how subtle Miller and company's handling of their Global Warming and Climate Change message was this time, how they don't hit the viewer over the head with their proselytizing.

While 'Happy Feet' focused on the tap-dancing Emperor Penguin named Mumble... this one spends more time with his little son Erik... who is simply irresistible. If one agrees that penguins in general are cute, Erik ups the ante considerably.

Preaches acceptance but requires assimilation. You dance or you die. Join the party, swim with the swarm.

Effectively, it's a few computer-generated birds staring into the abyss for an hour and a half. I know exactly how they felt.

A shambles that's somehow both terribly lazy and hernia-inducingly overcranked at the same time. Disappointing.

If there's a saving grace, it's the visuals, especially the beautiful scenes of orange krill. But that's about all.

Will have you mumbling along with Mumbles, Gloria, and their new son Erik as you and your kids leave the theatre.

I was a fan of that original, but this one is pointless. The biggest problem is the story, if you want to call it that, which is flimsy at best.

Happy Feet Two is the kind of movie that won't make you scream in pain while you're watching it, and that won't prompt you to remember much about it once it's over.

It's all perfectly acceptable viewing and it has its heart in the right place, but with only one memorable musical number and very little comedy, it's just not as fresh and fun as the first film.

Frankly, it seems like the story took a backseat in favour of the visuals, coming across as a loosely related series of song and dance numbers that work better separately than in the context of the film.

The laughter from its splendid supporting cast (Williams, Pitt, Damon) hard to miss, no doubt, but Happy Feet Two lacks the magic it's Oscar-winning predecessor had all due to its inconsistent story and cheesy references. The film still produces a pulse-pound beat and sound, just not as strong as the first. 3.5/5

They should have stuck with one...

Every step counts. Not great but not bad either. Not much different from the first. It had penguins. All kinds of penguins. They all danced around and sang a bunch of hit singles. Only this time there is the whole Global Warming undertone. In short, I wish I could love this movie. But... There's too much of too little. I need more than just cute penguins, though. I need enjoyability to go with it. And while this film isn't bad at all, I can't recommend it except only for kids. Mumble the penguin has a problem: his son Erik, who is reluctant to dance, encounters The Mighty Sven, a penguin who can fly! Things get worse for Mumble when the world is shaken by powerful forces, causing him to brings together the penguin nations and their allies to set things right.