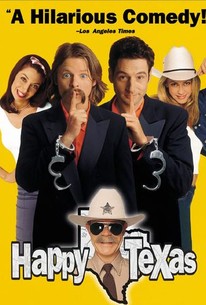 Happy, Texas is a fish-out-of-water comedy about two con men who escape from prison, then pose as gay lovers to hide out in a small Texas town. Mistaken for consultants to the Little Miss Fresh Squeezed Beauty Pageant, Harry (Jeremy Northam) and Wayne (Steve Zahn) go along with the ruse so they can stake out the local bank, owned by Josephine "Joe" McClintock (Ally Walker). The story kicks into high gear as Harry starts falling in love with Joe but cannot let on about his feelings. Also complicating matters is that gay Sheriff Dent (William H. Macy) has the hots for Harry, and Harry must pretend he's interested to keep the cops off his back. Meanwhile, Wayne is getting in touch with his feminine side as he tries his best to teach dance steps and flaming baton twirling to the little girls; he's also lusting after the girls' teacher, Ms. Schaefer (Ileana Douglas). Everything leads up to the big beauty pageant, where the cops are finally on Harry and Wayne's tail. First-time director Mark Illsley received wide media attention for this commercial piece, which sold to Miramax after a very public and intense bidding war. Steve Zahn's performance won him a special acting award at the 1999 Sundance Film Festival, where the film premiered in dramatic competition .

Mark Illsley
as Guard on Horse

Melissa Arnold
as Other Happy Girl

Cassie Silva
as Other Happy Girl

Tiffany Takra
as Other Happy Girl

Steve Zahn shines in Illsley's feature debut, elevating this eccentric small-town comedy two notches above the level of writing. Using the fish out of water format, this Sundance premiere begins well but then declines rapidly.

...although it reverts to slapstick for its set-piece chase finale, for most of its length Mark Illsley's debut film offers an unexpectedly gentle, even sentimental comedy of sexual identities...

A charming fish-out-of-water romantic comedy, the modestly budgeted Happy, Texas more than makes up in heart what it lacks in splash.

Happy, Texas is a hoot, a hilarious comedy that's smart and caring, yet sexy and ingenious enough that it just might stir up some of that elusive Full Monty-style box-office appeal.

Uneven in places but with a few choice hilarious moments, it is well worth the rental.

Happy, Texas is a light, breezy and very amusing comedy.

"Happy, Texas" is a fresh, frisky and very funny feel-good comedy that delights in upending expectations by avoiding cheap shots and demeaning caricatures.

It is a film I love, a film I watch regularly, and a film that makes me laugh each and every time.

Every bit as cheery as the title implies--but good will can only go so far.

first-time filmmaker Illsley displays a surprisingly firm yet gentle hand with both his script and his enormously appealing cast.

Odd couple buddy picture with Rom-Com elements that work. Zhan gives one of his most hysterical performances to date. Lighthearted, watchable, and fun.

The set-up is so strong that it's impressive to see it progress so effortlessly.

My husband and I consider this one of our all time favorites. Not only did it have one of my favorite actors, William H. Macy, but the whole subject matter was hysterical. Funny, funny movie.

It was okay but definitely not hilarious...I think maybe I laughed once. I think the movie had a lot of potential but it fell flat.

i pretty terrible film really i wouldnt recomend it to anyone!