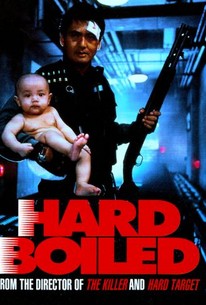 Critics Consensus: Boasting impactful action as well as surprising emotional resonance, Hard Boiled is a powerful thriller that hits hard in more ways than one.

Critics Consensus: Boasting impactful action as well as surprising emotional resonance, Hard Boiled is a powerful thriller that hits hard in more ways than one.

Critic Consensus: Boasting impactful action as well as surprising emotional resonance, Hard Boiled is a powerful thriller that hits hard in more ways than one.

Yun-Fat portrays a maverick, clarinet-playing cop nicknamed "Tequila" whose partner is killed in the dizzying chaos of a restaurant gunfight with a small army of gangsters. It is soon revealed that one of the mob's high-ranking assassins is Tony (Tony Leung), an undercover cop who, despite his badge, is dangerously close to the edge. Tequila and Tony must team up in a tense partnership, and their common pursuit of a vicious crime lord results in a brilliantly elaborate climax in a hospital, where the heroes must rescue newborn babies from the maternity ward while fighting off dozens of mob soldiers. ~ Jonathan E. Laxamana, Rovi

Choreographically stunning like most of Woo's work, especially before he headed West.

A master stylist, Woo is similarly brilliant at examining the moral and social hierarchies of his patriarchal crime worlds.

Mr. Woo does, in fact, seem to be a very brisk, talented director with a gift for the flashy effect and the bizarre confrontation.

It's nirvana for seekers of action, and it rarely gets any better than this.

Infinitely more exciting than a dozen Die Hards, action cinema doesn't come any better than this.

One of the most exhilarating action films of the decade.

A striking yet overlong actioner...

The film is a life-support system for its third act.

A moody, tense, moving and action-packed crime drama -- one of Woo's very best.

Accomplishes a lot within its time frame, and it's an accomplishment only Woo is capable of.

Far-fetched and yet exciting and tense. For all its plethoric blood spilling, cheesy one-liners and balletic gunfights this must be the quintessential hong kong action flick. A master class of choreography.

One of the greatest action movies ever made. A very stylish, pulse-pounding, unstoppable and unforgettable movie. Director, John Woo's action movie masterpiece. A bullet riddled classic in it's own right. The action sequences are spectacular, explosive, wild, outrageous and energetic. Chow Yun-fat is one of the greatest action movie hero's of all time, he plays with bullets as if they were candy and gives a sensational and terrific performance. Tony Leung gives a breakout performance, he is slick, stylish and very impressive in the role. They have great chemistry. Woo knows how to craft the story with characters that matter and make you compelled to follow them all the way through. An awesome adrenaline rush from start to finish. It's nothing but a good time from stat to finish. It's a two-hour roller-coaster ride that has your pulse-racing and heart-pounding all the way to to the end.

A renegade cop teams up with an undercover agent to bring down a gun runner with a massive arms cache hidden in a local hospital. John Woo is pretty useless when it comes to anything but action, so it comes as little surprise that his best film by far includes very little else. And action it has in spades! The now familiar tough guy cop clad in sunglasses and duster coat, leaping through the air in slow motion, twin pistols blazing has now passed into cliche, but Woo invented it. Woo's artistic take on action influenced everyone from James Cameron to the Wachowski brothers and Robert Rodriguez would probably be gainfully employed behind the counter of the nearest Taco Bell without this film. The action is non-stop and absurdly over the top, and if it weren't it wouldn't have worked half as well. It's true that the characters are total stereotypes, the dialogue corny and the action genre has certainly moved on since 1992, but like its contemporary martial arts films the lack of CGI and modern camera techniques gives it a rawness and physicality that's missing from today's equivalents. It's an exploitation flick cunningly disguised as a cop thriller and the combination of brilliantly choreographed violence (the extended takes of the hospital shoot out in particular) and super-cool leads makes for an unpretentious, action packed blast. The birth of the modern action movie.