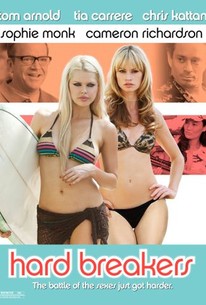 Driven by a history of dating pitfalls and frustration with men, Alexis and her best friend Lindsay decide to turn the tables and devise a plan to lure unsuspecting men close enough to knock them out and drag them back to their lair for their own satisfaction. When an absent father and an obsessive ex-boyfriend force Alexis to confront her issues with men, the girls' plan goes awry and Alexis falls head over heels in love with one of her male conquests. Lindsay, consumed by her darker nature, decides to go out on the hunt alone, leading to her arrest. In the end, the girls reunite and recognize the strength of their friendship and that ultimately; their own self worth determines how men will treat them. -- (C) Official Site

Wayne King
as Bouncer One

Joe Hursley
as The Ringers Vocalist

Joe Stiteler
as The Ringers Bassist

Patrick Hursley
as The Ringers Drummer

Brett Novek
as Skaterboy One

Joseph Stiteler
as The Ringers - Bassist
View All

The film might be the closest approximation to the gender inverse of an Apatow flick.

Woefully inept and stupendously unfunny -- a movie that slots into that special sub-category of terrible, the one that calls out for alcohol and friends with an appreciation for barbed derision.

A battle-of-the-sexes farce where vindictive females force their unsuspecting prey to be friends with benefits, whether they want some or not!

Remember those teen sex comedies like Losin' It that started the careers of people like Tom Cruise? This isn't one of them.

This surfing sex comedy does no favors to any of those words, and words don't really seem to be familiar territory to most of these characters in the first place.

There are no featured reviews for Hard Breakers at this time.