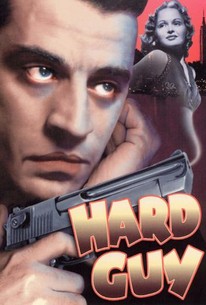 In this crime drama, a smooth-talking nightclub owner makes a few extra dollars by getting wealthy young men to marry his chorines. He then gets money's from the young men's appalled father to get the weddings annulled. Trouble ensues when one dancer rebels against the scam and winds up shot by the club owner. The dead dancer's sister travels from Kansas accompanied by a young man. They make sure that the killer pays for his crime. A shoot-out in the club ensues. The owner is killed, and the sister and her helper fall in love.

Arthur Gardner
as Dick
View All

There are no critic reviews yet for Hard Guy. Keep checking Rotten Tomatoes for updates!

There are no featured reviews for Hard Guy at this time.