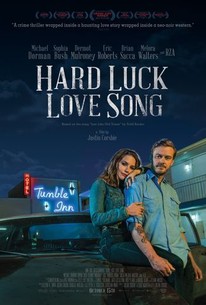 Hard Luck Love Song is writer/director Justin Corsbie's feature debut. The story follows Jesse (Michael Dorman), a charismatic but down on his luck troubadour who finds himself at an existential crossroads as bad choices catch up with him during an unexpected reunion with Carla (Sophia Bush), an old flame. The script is based on the song "Just Like Old Times" by acclaimed Americana singer/songwriter Todd Snider. The talented ensemble cast also features RZA, Dermot Mulroney, Brian Sacca, Melora Walters, and Academy Award nominated Eric Roberts. At its core, the film is a modern day love story wrapped in a gritty, compelling character study.

"Hard Luck Love Song" is the kind of movie that would sit right next to someone at the world's saddest dive bar even if the place was full of nothing but empty seats.

Justin Corsbie's self-indulgent indie is not worth the effort of making a disparaging pun based on its title.

Michael Dorman does great work as a small-town hustler pursued by gangsters.

Hard Luck Love Song's ultimate turn is a twist too far, and perhaps to a fault the film's most memorable moment.

"Hard Luck Love Song" is a happy but gritty marriage of material, filmmaker and star. Much is asked of Dorman, and he delivers all.

The twists are violent and silly and have little relation to the gritty realities of Snider's world.

This is a cute little movie. It works as a happy little holiday movie.

It sounds like something you've heard before, and sometimes that doesn't matter; but by the time the goofily triumphant ending rolls around, you realize this isn't a winning hand.

Hard Luck Love Song wants viewers to believe it's a gritty and realistic portrait of an American drifter, but the movie falls apart in the last 30 minutes, with one unrealistic scenario after another.

Overall, Corsbie effectively captures a world where nothing gets more elegant than dingy bars and grimy little motel rooms.

This gritty adaptation of lyrics by one of Nashville's most original songwriters is slightly off-note, although the melodies themselves are off the charts.

A been there, done that drama about a broken soul that is by no means terrible a film, but it certainly is forgettable.

There are no featured reviews for Hard Luck Love Song at this time.