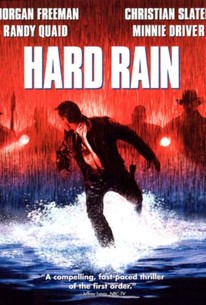 This movie was released as a thriller rather than a disaster flick. The story involves an armored-car heist with the impending threat of a natural disaster approaching.

Michael A. Goorjian
as Kenny

Ray Baker
as The Mayor

Mackenzie Bryce
as Baby on Local News
View All

Virtually nothing that takes place here is believable for a moment, beginning with the idea that all these people would expend all their energies trying to shoot one another when they are so imperiled to begin with.

The flood rises, the night grows murky, and it becomes clear that the more water there is on screen, the less room there is for anything of interest to happen.

Hard Rain may not be the most inventive of thriller plots, essentially boiling down to an extended chase with all concerned after the moneybags, but it's extremely impressive as a physical production.

For all the talent and effort involved, ''Hard Rain'' turns out to be routine entertainment.

In terms of pure visuals, I loved this film.

It impresses because of the way it makes the flood look so vital to the narrative.

It's big, dumb, noisy, and teeming with idiotic dialogue, yet the finished feature has a certain merry swagger about it that keeps everything motoring right along, and the hook of the film is immaculately presented.

You know you're in trouble when Betty White (denture wearer...Rogaine needer) is the big scene-stealer.

Overall, HARD RAIN is the kind of film that most people will see, enjoy, and forget five minutes later... entirely adequate.

A great action and adventure movie with a bunch of great actors. This movie is an exciting natural disaster thriller, and if that intrigues you, you should see it.

A guard from an armoured security van is stalked through a flooded town by a gang seeking to rob his $3 million payload. Hard Rain is nothing but a bare-boned, crowd-pleasing action film and never pretends to be anything else. It jumps straight in with the action and never looks back, and the formula of western-on-boatback and likable performances from the above average cast made me warm to it from the outset. There is a smattering of funny lines amongst the amusing action sequences and it all seemed like a harmless bit of popcorn fuelled fun. Unfortunately, as the plot gets more and more preposterous it gets harder and harder to care and by the end I'd lost all interest. It's inoffensive in a no-brainer kind of way and there is the added novelty of seeing Morgan Freeman play a bad guy, but as a whole it's very forgettable. Wet but not very wild.

Officer: You took the money. Didn't you son? Tom: Yeah I hid it in the cemetery. Officer: Why you do that? Tom: I don't like to carry around that much cash, ya know? A solid example of an average 90s action flick. Revisiting this film over ten years later, its neat to watch this and reflect on the reasons why this film works for what it tries to do. There is a unique setting at play, R-rated violence, and some creative action sequences that make this an entertaining flick. Christian Slater stars as Tom, an armored truck driver, taking $3 million in cash out of town with his partner/uncle Charlie, played by Ed Asner. The town just so happens to be experiencing a giant flood, causing the town to be evacuated, with the local sheriff, played by Randy Quaid, and his men making sure everything is secure. As Tom and Charlie make their way out of town, the truck gets stuck. Soon, help arrives in the form of a group of crooks, headed by Morgan Freeman, who have planned to steal the money from the truck. A brief misunderstanding results in a shootout, with Charlie killed and Tom on the run with the money. He manages to hide the cash, but the crooks are still on his tail. As Tom eventually makes it to the police to explain his story, Tom may find that the power of greed can make many more become his enemy. From the writer of Speed, this film doesn't aspire to be anything monumental, but it does do a number of things to switch up the standard plot reveals. There are some character team ups that are quite enjoyable, making the film that much more interesting and entertaining. The other thing to take away from this film is that it must have certainly been expensive. I say this because the constant rain and use of water to create new situations for the characters to deal with is certainly on display here and makes for a good way to keep things moving. Add to all this a reliable Morgan Freeman to lend some credence to the proceedings and you have all the makings of a solid action flick. Its not genius film making, but its the kind of 90s staple that makes for a good viewing. Jim: Look, I've had a long, frustrating night. Now maybe I get the money, maybe I don't, but I'm getting to the point where I just don't care.