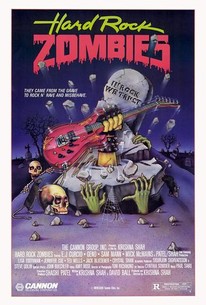 Some performers take the old saw "the show must go on," a little too literally as can be seen in this parody that makes fun of horror movies and heavy metal rock. It all begins when four flamboyant rockers are slaughtered by a bizarre woman and her family. Knowing that their fans are dying to see them, none of the band members is about to let a stupid thing like death stop them from putting on their concert, so they rise from the grave and give the greatest concert of their lives.

Mick McMains
as Robby
View All

It's atrocious, but in an enjoyble way. Except for the music, which is not enjoyable in any way.

This was by far the worst attempt at a zombie film I have ever had the drunken misfortune to be forced to sit and watch. I dont know what the hell possessed me but it would have been more realistic than this bunch of loons. Christ they even managed to shoehorn Hitler into it at the end.......wide berth ladies and gents wide berth.