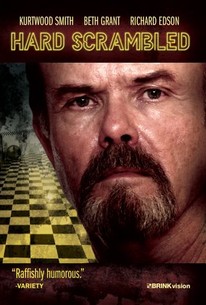 Filmmaker David Scott Hay answers the New Visions Fellowship challenge to make the most out of a small budget, a single location, and no special effects with this inventive and twisting tale of three amiable misfit diner employees whose quest to gain footing over one and other in eventually thwarted by their own ineptitude. Alice's Diner is celebrating its twenty-fifth anniversary, and though all appears well on the surface, unspoken tensions soon boil to the surface when the owner of the restaurant meets a grim fate at the celebratory shindig. Benno is an ex-con and part-time lover to the owner who served as second-in-command to the watchful Alice. Though juvenile delinquent Scotty initially entered the restaurant with the intentions of cleaning out the cash register, he later walked out as Benno's assistant when the sympathetic owner took pity on him. Lastly, Joe makes the deliveries for the diner while struggling through a bad marriage and awaiting the moment to make his big move. When the party takes a turn for the worse and the diner proves in need of a new owner, these three hapless souls will enter into what would be a cutthroat competition for ownership if only their figurative knives weren't so dull.

Although a minor item more suited to home viewing than theatrical, it is anchored by a powerful performance by the veteran Kurtwood Smith in the film's well-written central role.

There are no featured reviews for Hard Scrambled at this time.