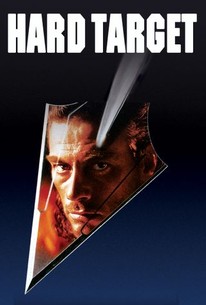 Critics Consensus: Hard Target gets a boost from John Woo's stylish direction, but at heart, it's still another silly, explosion-dependent action thriller in the Jean-Claude Van Damme oeuvre.

Critics Consensus: Hard Target gets a boost from John Woo's stylish direction, but at heart, it's still another silly, explosion-dependent action thriller in the Jean-Claude Van Damme oeuvre.

Critic Consensus: Hard Target gets a boost from John Woo's stylish direction, but at heart, it's still another silly, explosion-dependent action thriller in the Jean-Claude Van Damme oeuvre.

John Woo's first Hollywood feature stars Jean-Claude Van Damme as Chance Boudreaux, a down-and-out Cajun merchant seaman, who, after saving a young woman, Natasha Binder (Yancy Butler), from a gang of thugs on the streets of New Orleans, agrees to help her search for her father (Chuck Pfarrer), a homeless Vietnam vet. They locate local businessman Randall Poe (Elliott Keener), for whom the vet had been working, and learn that her father has become a victim of wealthy sportsman Emil Fouchon (Lance Henriksen), who, along with his cronies, hunts homeless men as a form of recreation. After Fouchon finds out that the girl is investigating the murder of her father, he arranges for she and Chance to be ambushed, but they manage to escape into the backwoods of Louisiana -- his stomping grounds. Realizing he needs to regroup, Fouchon assembles a private army to invade the bayous. They track the pair to the rustic cabin of Chance's Uncle Douvee (Wilford Brimley), and the real fireworks begin. ~ Michael Costello, Rovi

Ted Raimi
as Man on the Street

Mike Leinert
as Frack
View All

The combo is an incendiary mix: Woo unleashes all barrels in vintage Hong Kong action style while Van Damme delivers not only his martial-arts prowess but some well-developed acting skills as well.

Though it lacks the epic feel and melodramatic sincerity of Woo's Oriental movies, this is nevertheless first-rate action.

A disappointing American debut of the Hong Kong cult director John Woo is a decent action vehicle by standards of its star Jean-Claude Van Damme but, hampered by a B script and flat characters, it doesn't bear Woo's auteurist signature and unique vision

It's what Hollywood wanted Woo for: bigger, brighter explosions.

Presenting Mr. Van Damme as reverentially as Sergio Leone did the young Clint Eastwood, Mr. Woo displays a real aptitude for malignant mischief, which is this story's stock in trade.

Even when the acting is hammy, notably Wilford Brimley's turn as Chance's Cajun uncle, Woo stages every fight with hypnotic grace.

the second half plays like an all-out action extravaganza, a symphony of bullet-strewn slow motion and hyper-real physicality

Wilford Brimley pops up as Uncle Douvee; he's supposed to be Cajun, but he sounds more like Maurice Chevalier shot full of Novocain.

A watershed moment for action cinema.

Van Damme's Martial Arts stunts are second to none and back in the early 1990's he was in tip top shape.

The most satisfying entry in Van Damme's rise to glory during the early 1990s, smartly using the star's limited vocabulary and limitless flexibility to create one of the finest B-movies of the decade.

With its expert use of dissolves and pans, Hard Target is an arty shot of adrenaline to this overworked genre.

Director, John Woo's first American film is an action masterpiece. A fun, explosive and adrenaline-charged edge of your seat action-packed thriller. It's loaded with dark humor, bone-crunching fights and enough explosive gun-battles to keep any action fan entertained. Van Damme and Woo are a stellar team together, bringing exactly what we want. Easily one of Jean-Claude Van Damme's best films. Lance Henriksen gives a thrilling and intense performance. This is one wickedly cool and wildly entertaining action movie.

Haha this is really silly and really tacky but again the over the top violence and ultra cool gun fights really rock ass LOL! Henriksen gives it a touch of class and really hams it up beautiully haha and Woo really loves his slow mo leaps n gun pan shots LOL!. Predictable but great fun, and a dodgy Jean Claude hair style.