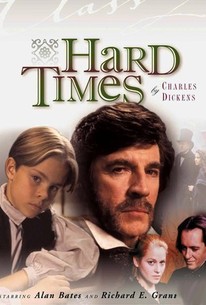 The difficult realities of life in Britain during the early Industrial Age are explored in this made-for-television adaptation of the novel by Charles Dickens. Thomas Gradgrind (Bob Peck) is a schoolteacher working in Coketown, a grim industrial town in the North of England, who believes that facts are of supreme importance and imagination is folly. Gradgrind imposes his philosophies on his children, arranging for his daughter, Louisa (Beatie Edney), to marry Josiah Bounderby (Alan Bates), a businessman old enough to be her father, who also employs her brother, Tom (Christien Anholt). As Louisa tries to find a way out of her relationship with Bounderby, she finds herself pursued by the even more repellant James Harthouse (Richard E. Grant). ~ Mark Deming, Rovi

There are no critic reviews yet for Hard Times. Keep checking Rotten Tomatoes for updates!

There are no featured reviews for Hard Times at this time.