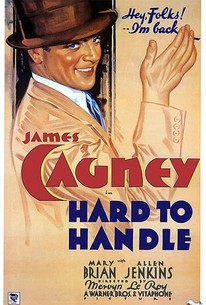 Hard to Handle stars James Cagney as a fast-talking promoter who pounces upon every current fad and foible to make a quick buck. He promotes marathon dances (where spectators feel cheated because no one drops dead), crash diets, reducing creams and treasure contests, finagling his way into the confidence of high rollers and money men. In a cute "inside" joke harking back to a choice Cagney moment in The Public Enemy, our hero at one point takes up the promotion of grapefruits! Like most conners, Cagney isn't aware when he is being conned himself, and he falls victim to his marathon-dance business partner, who absconds with the winnings. The contest winner is pretty Mary Brian, whose mother (Ruth Donnelly) tries to extract payment by forcing Cagney to marry her daughter. He does, but only after eight reels of high-pressure wheeling and dealing. In the tradition of Jimmy Cagney's other early-1930s, Hard to Handle is socked over by the energetic insouciance of its star.

Critic Reviews for Hard to Handle

There are no critic reviews yet for Hard to Handle. Keep checking Rotten Tomatoes for updates!

There are no featured reviews for Hard to Handle at this time.