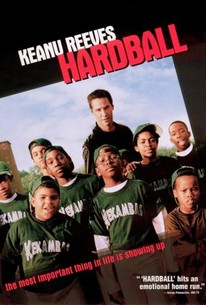 Critics Consensus: Although Hardball contains some touching moments, they are not enough to transcend the sports formula.

Critics Consensus: Although Hardball contains some touching moments, they are not enough to transcend the sports formula.

Critic Consensus: Although Hardball contains some touching moments, they are not enough to transcend the sports formula.

Television actor-turned-director Brian Robbins follows up Varsity Blues (1999) and Ready to Rumble (2000) with another sports comedy. Keanu Reeves stars as Conor O'Neill, an underachiever and inveterate sports gambler who needs a bailout loan from a friend to pay off his mounting debt. As a condition for receiving the necessary funds, Conor is saddled with coaching a corporate-sponsored Little League baseball team for underprivileged youth in Chicago's notorious Cabrini Green housing project. Reluctant at first, Conor slowly begins to enjoy his new authority role, especially when he makes the acquaintance of his players' attractive teacher, Elizabeth Wilkes (Diane Lane). Based on the real-life chronicle Hardball: A Season in the Projects by Outside magazine editor Daniel Coyle, Hardball also stars D.B. Sweeney and Mike McGlone.

Michael B. Jordan
as Jamal

Sammy Sosa
as Himself

Vince Green
as Other Pizza Guy

Michael B. Chait
as Straight-Laced Kid

The filmmakers realize that playing baseball isn't nearly enough to fix what's wrong in these kids' lives, which might have made a more provocative ending than what follows.

[Keanu] Reeves is often mocked for his blankness, but that quality is an asset here.

Director Brian Robbins' film ultimately seems as uninterested in penetrating the graffiti-scarred walls of its Cabrini Green setting as its white-bread protagonist is.

This umpire calls Hardball out at first base.

[Keanu] Reeves doesn't strike the right chord -- you never get the feeling he's not acting.

Even if "Hardball" is mostly soapy formula at its core, it's a formula that at least finds a satisfying groove.

At heart, it's still an underdog sports flick of the sort we've seen countless times.

Stereotypical at its best, copycat at its worst, Hardball is okay but nothing special.

It's clichéd, tacky and cynical.

Hardball is as shallow and manipulative a movie as any that come to mind.

Despite his charm, Keanu Reeves hasn't the authority to carry it through, and his performance only underlines the clichés.

It's simple stuff to be sure, but it's done so damn well you really don't mind.

It's an incredibly dumb urban sports movie that tries to cover racism and male comradery. Keanu Reeves plays a gambling low life who gets stuck coaching kids, so it's nothing you haven't seen before. I can tell that it wasn't supposed to be good, but that doesn't make it okay.

This hard-edged little dream deserves plenty of credit for avoiding the light comedy and fairy-tale conclusions by which underdog sports sagas usually are known, and would deserve an even higher rating were it not for Keanu Reeves's wooden (as usual) performance in the lead role. Really fantastic and emotional home run story.

It took me a week to come out with a rating on this one, and I still can't decide whether it's a pretty good movie with some really bad parts, or a bad movie with a few really good parts. The screenplay seems decent, but the dialogue is rough; Keanu Reeves is mostly bad, Diane Lane is mostly good. The sports scenes are more cliched and contrived than in any sports movie in recent memory - who makes up bristol board signs and cheers THAT much for little league baseball?? - but the "ghetto scenes" got away from the cliches that one usually sees in films with that subject matter and are surprisingly raw. All in all, the contrast the film draws between the hopelessness of day-to-day life in this particular community and the magic of baseball is very striking, and almost too stark for the film to hang together. The potential in this film is what keeps you watching, and though its execution is questionable, you don't really lose faith in the story, and I think most people will stick it out rather than turn it off. Most people.

This is a really dark movie really. The main guy is in the dumps in a bad way and he hooks up with inner city kids to play baseball. He is pretty much a scummy guy until the end and he doesn't seem to get the lesson the situation is trying to show him. The ending is a real bummer and you leave this movie feeling worse than when you started it.