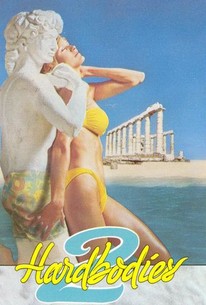 The plot of this retrograde softcore film starts off when two American low-budget, sexploitation filmmakers arrive in Greece looking for females (whether for their filming or their own amusement does not seem to be relevant). A fellow named Scott (Brad Zutaut) tags along, and when all is said and done, transfers his affections from his fiancée to a woman waiting tables on the island of Rhodes. Part of the 88-minute running time here is devoted to a floating classroom with semi-nude students, the other part is dedicated to the filming of the sexploitation feature and the adventures of a few minor characters.

Ulrika Hellstrom
as Girl at Airport

Elizabeth Pericolo
as Semester at Sea Girl
View All

There are no critic reviews yet for Hardbodies 2. Keep checking Rotten Tomatoes for updates!

There are no featured audience reviews yet. Click the link below to see what others say about Hardbodies 2!