The Harder They Come1973 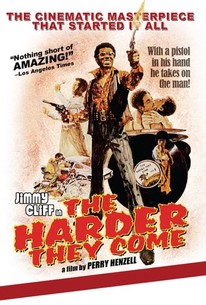 The Harder They Come Photos

Reggae legend Jimmy Cliff stars as Ivan Martin, an aspiring young singer who leaves his rural village for the capital city of Kingston, Jamaica hoping to make a name for himself. Robbed of his money and possessions his first day in town, he finds work with a self-righteous, bullying preacher and an unscrupulous music mogul who exploits naïve hopefuls. In desperation the simple country boy turns outlaw, at war with both the police and his rivals in the ganja trade. Ivan's dream of stardom soon becomes a reality as he rises to the top of the pop charts and the most-wanted lists. This gritty, groundbreaking film brought reggae music to the international stage, made Jimmy Cliff a star worldwide.

Basil Keane
as Preacher
View All

News & Interviews for The Harder They Come

Nine Movies That Bring the Funk
Hit Movie Songs from the 1970s
The Weekly Ketchup: A Third "Starship Troopers," Jack Black Collaborates With Michel Gondry, Tension Between Fox And Marvel Over "X-Men," And More!

View All The Harder They Come News

Critic Reviews for The Harder They Come

The movie turns into a feverish social-protest fantasy, and infectious charm and social convulsions mix badly.

The Harder They Come is always exuberant, and sometimes strong, as casually surprising and effortlessly sinister as the blade sliding out of a gravity knife.

Atrocious acting, amateurish camerawork and a hackneyed story line all make for one painful slog.

Perry Henzell emerges a director with a solid visual flair who can mix action and inchoate rage sans excess to give the film a taut pacing and use the local color and a basically predictable tale with a few new twists.

Perry Henzell has such a lot to say about Jamaica, about life, and he's given us quite a chunk of this, his first film. I look forward to his second.

'The Harder They Come' will be a film that's easy to watch for the years to come. Maybe one day we'll fix up the cracks it so expertly exposed a half a century ago

You should by all means see The Harder They Come. There's not even the slightest chance you'll be disappointed.

The Harder They Come is a landmark work of cinema, a film that helped expand understanding about a corner of the world often ignored.

A rough, raw and realistic work that became a box office sensation in its homeland and a cult favorite stateside.

The themes present in the film remain particularly relevant in today's climate.

Audience Reviews for The Harder They Come

This is probably the most well-known and important film to come from Jamaica. And, while it might not have been intentional, you could also lump this in as a blaxploitation film if you so desired. In his acting debut, we get musician Jimmy Cliff as Ivan, a young man from the country who comes to Kingston to try to make a better life for himself. He dreams of hitting it big as a music star, and, while that does happen, he gets caught up in the world of being an outlaw as well. The story has the familiar ring of rags to riches, dealing with fame and success, but ultimately gets saved by a solid lead performance, and a superb reggae soundtrack provided by Cliff, The Maytals, and a few others. Also, it is my understanding that this film was also the first time where wide audiences were shown a clear divide between the Jamaica of the tourism industry, and how it really is. It's not so revelatory now, but I'm sure this was quite something back in the early 70s. Thankfully the film is merely showing and telling it like it is, as opposed to being an exploitative venture into the dark underbelly of a supposed paradise. This revealing of how it is also includes jabs as the country's music scene, and the inherent corruption involved with it. I dug this film a lot, but I don't think it's quite the landmark as its often labeled. Don't get me wrong, it's is quite good, but it didn't grab me like it has a lot of others. It's worth seeing though, especially if you dig reggae, and, if you're not familiar with Jamaica, the film does have occasional subtitles, which are nice since sometimes the accents are so thick, and the manner of speaking is so strong that the film would be all but incomprehensible otherwise for non-natives. All in all, this is a pretty good time. It's a tad overrated, but enjoyable nonetheless.

A must see for anyone interested in Reggae music. A totally authentic look at Kingston in the early 1970's.

It makes up in talent what it lacks in budget. Amazing songs, feeling of sheer authenticity, social commentary and gripping guerrilla filmmaking

Ivan is a country boy in Jamaica who comes to see his Grandmother and `make it big' by recording a record. However when he finds himself exploited by a record producer he turns to drug running to make money. When he kills a cop who is in on the trade he goes on the run and finds fame as an outlaw standing up against `the man'. I first saw this in a cinema in 1995 and it was fully subtitled, I watched it again last night and it had no subtitles. It was slightly hard to follow some of the very thick dialogue so I suggest if you have the choice that you go for the subtitles unless patwa is a very familiar dialect to you. The plot takes swipes at the exploitative music business but also the nature of celebrity and the problems of drugs. However at it's heart it's a reggae gangster movie that is gritty and enjoyable. The story is involving but really it's the detail of the setting that carries the film. The camera allows a great sense of place and really captures the mood and place well, using crowd shots and wandering shots to music. Really the best scenes are all natural as music plays in the fore ground. The music is one of the strongest aspects to the film ? where the gangster element is sprawling and relaxed, the music allows us to accept this whole chilled out vibe as just part of the film. The cast also helps greatly by being very realistic without much effort, not trying to make the accent easier is a brave move if you want to sell the film! Cliff is easily believable and very watchable, likewise almost all the cast are great ? many not being actors. Overall the plot may wander in the way only a Jamaican can! But the music and the vibe more than make this a cult film that is well worth watching whether with subtitles or not!

The Harder They Come Quotes