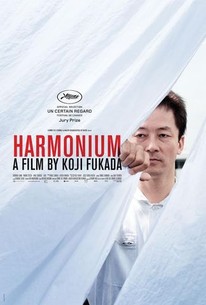 With his highly perceptive attention to character, director Koji Fukada creates an explosive family drama with HARMONIUM (FUCHI NI TATSU). Intended as a companion piece to the black comedy HOSPITALITE, HARMONIUM returns to the domestic sphere as it captures the collapse of a seemingly ordinary Japanese family. Life for Toshio, his wife, and their younger daughter Hotaru carries on as usual until he hires the mysterious Mr. Yasaka, an old acquaintance dressed in white who has just been released from prison, in his workshop.

Is there anything more gratifying than a sweepingly downcast story told in a uniquely exhilarating manner?

Tadanobu Asano, who plays the ex-con, has rarely been better, and Kanji Furutachi and Mariko Tsutsui are heartbreaking as the husband and wife.

The spare, humanist influence of Ozu is plain to see here, but Fukada's tone is all his own, simultaneously shot through with violence and compassion.

It makes for a uniquely churning mix of detective story and recovery drama before it throws another wrenching reveal into the works.

Fukada never resorts to melodramatics, and instead allows the carefully calibrated performances to give the movie its disquieting power.

If you treat Harmonium like a mood piece, and respond to it on that level, you'll find yourself thinking about it long after you watch it.

"Harmonium" is another great piece of Japanese cinema, and the Jury Prize it received from the Un Certain Regard section at the 2016 Cannes Film Festival, well reserved.

Kôji Fukada... makes us think, too, about remorse and forgiveness, atonement and retribution, and the conclusion he delivers is quietly devastating.

Harmonium is so exquisitely crafted, featuring such quietly magnificent acting, editing, and direction, that it barely sullies the emotional maelstrom Harmonium leaves swirling in its wake.

Andrea Thompson
A Reel of One's Own

It's a disturbing, dark, heartbreaking drama with merciless twists that give no easy answers to complex questions of forgiveness and redemption, and how relationships may be based on truth or lies.

The director competently elucidates us about how hard it is, in certain cases, to forgive and forget.

Harmonium is a borderline-unbearable bummer, but it's also quietly captivating, with evocative framing and excellent performances.

There are no featured reviews for Harmonium (Fuchi ni tatsu) at this time.