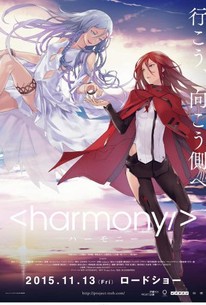 In a future ruled by an unwavering dedication to good health, three high school girls led by the defiant Miach Mihie attempt suicide as the ultimate act of rebellion. Tuan Kirie survives, but can't shake the hatred she has for the "perfect world" she lives in. Years later, a simultaneous mass suicide rocks the globe and sends society into a state of shock. A small group stands up to take credit for the event, claiming they've hijacked the consciousness of every person on the planet. Everything about the terrorists' message sounds too familiar to Tuan. She suspects her old friend Miach might be involved, but how could that be when she'd supposedly killed herself years earlier? Desperate for answers, Tuan launches an investigation that takes her across the globe chasing the ghost of her old friend. But what is Miach's end game? Will she finally wake the world from its monotonous slumber? Or, end it all for good?

Although the film is bubbly and full of happy colors, the subject is much darker and approached in a successful manner. It's Anime for the adult brain.

Arias and Nakamura direct an extremely intricate story in a complex environment, with constant plot twists, very interesting characters, and many social and political messages. However, their direction does not succeed in portraying all this intricacy

It's bold, disturbing, and makes you think. The ending was a bit disappointing but still good film.

Harmony prefers to stay behind the lecture podium, asking the audience to draw its own conclusions about free will but handing it too many notes to sift through.

There are no featured audience reviews yet. Click the link below to see what others say about Harmony (Hamoni)!