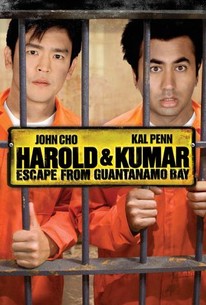 Critics Consensus: It may not equal its predecessor, but Harold and Kumar Escape from Guantanamo Bay is still good for some laughs -- and food for thought.

Critics Consensus: It may not equal its predecessor, but Harold and Kumar Escape from Guantanamo Bay is still good for some laughs -- and food for thought.

Critic Consensus: It may not equal its predecessor, but Harold and Kumar Escape from Guantanamo Bay is still good for some laughs -- and food for thought.

After successfully seeking out the ultimate slider in the 2004 stoner comedy Harold and Kumar Go to White Castle, the cannabis-craving twosome returns in this high-flying sequel that finds them labeled terrorists for attempting to sneak a marijuana-smoking implement on a flight to Amsterdam. Harold (John Cho) and Kumar (Kal Penn) have just finished gorging themselves on savory White Castle hamburgers when they return to their apartment and hatch a plan for Harold to win the heart of his crush, Maria (Paula Garcés). Maria is going to Amsterdam, and if Harold can catch up with her overseas perhaps he can strike up a real love connection. After a close call with airport personnel and a chance encounter with Kumar's ex-girlfriend Vanessa (Danneel Harris) -- who hadn't yet told Kumar that she's engaged to be married -- the pot-loving pals finally board their flight for Amsterdam. Unfortunately for Harold, Kumar isn't able to endure the lengthy flight without an innocent puff or two from his smokeless bong. When the plane hits some turbulence and the bong is mistaken for a bomb, the flight is diverted to Guantanamo Bay and our spliff-smoking heroes are detained by overzealous Deputy Chief of Homeland Security Ron Fox (Rob Corddry). Now, if they can just escape from the world's most notorious prison compound, perhaps this hapless duo can succeed in convincing the authorities that they aren't enemy combatants, and that Kumar made the mistake of his life by letting Vanessa go. But before they can prove their innocence and get the girls, Harold and Kumar will have to outsmart the dreaded Ku Klux Klan, contend with a particularly precocious Cyclops baby, and successfully elude everyone's favorite debauched former child star -- Neil Patrick Harris. ~ Jason Buchanan, Rovi

Danneel Harris
as Vanessa
View All

As the idea is no longer fresh and the plot has basically the same structure, it doesn't quite match the original. But the sequel delivers enough new developments to keep it interesting.

The film is so even-handed and so diligent in its urge to offend that after a while I felt myself go numb.

Amid the dick jokes, drug taking and gratuitous nudity, the film also serves as a salient reminder about what actually ranks as subversive comedy.

While not without its funny moments, this labored sequel ups the nudity and gross-out factor while diminishing the sweetness and evident camaraderie of its appealing leads.

Harold & Kumar Escape from Guantánamo Bay, a loosely strung-together collection of sex, race, and stoner jokes, is, by any rational standard, a terrible movie, yet I kept laughing at it, and I came out of the theatre in a good mood.

[A]ctually scores more points off the nation's paranoid and repressive post-9/11 mindset than all of Hollywood's hand-wringing war-on-terror dramas put together.

When Harold and Kumar travel through a completely Bush-ified American South and then head to Amsterdam, the film's message couldn't be clearer.

It's hard to dislike this film, even though it's so patently lame. Cho and Pen have great chemistry. And they're so amiable and endearing on screen.

What, really, is so progressive about jockish games of yeah-dude-I-just-went-there - especially as played by guys whose views of women are stuck in high school gym class?

My main objection boils down to this: if the filmmakers set up an anything-goes policy of outraging all notions of human dignity, they're obligated to live up to it without respecting age, race, creed, class, nationality -- or gender.

For a stoner comedy, it makes some lucid points.

A big step (or two) down overall when compared to its predecessor, but this is still a pretty funny and extreme satirical comedy in which no one is spared. The freshness wasn't all there, but I enjoyed the movie regardless. Here's to hoping that future sequels keep from getting stale, and creativity enters back into the mix. Also, the title needs to be changed. Keeping it the way it is with how the film plays out is asinine. They need to call it Harold & Kumar go to Amsterdam or something. What hurts the movie the most, for me, is that it's a really big retread of the first, but this time they take the shock humor to some extreme and sometimes really offensive levels. Some of it does work, some doesn't, but it is overkill regardless. I still give it a lot of credit however because it does tackle some actual issues, even if it mostly prefers to focus on the dumb humor.

Neil Patrick Harris: Gentlemen start your engines! It's gonna be a bumpy ride! This is a very stupid, vulgar, and predictable comedy, with some lame romantic comedy cliches and attempts at political satire, but you know what? It has some very funny moments. As a movie its not as good as the first one, but it certainly has more memorable moments (Emo Harold). Much of the problem comes from whats been done to this film in relation to how the first one did things. This film certainly expands its scope to make it more of an epic stoner comedy, but much of the charm in the first film came from the relevant insight handled in a funny and appropriate manner. Here, the film basically works as a live action version of South Park in many scenes. Still, it's hard not to laugh at what is going on in this movie. It also helps that Neil Patrick Harris is hilarious every step of the way for his amount of screen time. Rob Cordry goes out on a limb to make is character so stupid-goofy-racist that it works. And then there's a terrible Bush impersonator who actual makes it through to being fairly funny. So much is pushed into this film that a good chunk of it sticks, therefore making it an acceptable comedy, which I laughed at a lot, even if I don't have the desire to go and see it again. Chloe: You remember that time you stole that monkey and put it in Rosenberg's dorm room? Kumar: Had I known that the monkey had AIDS I never would have done that.