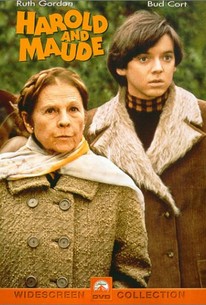 Critics Consensus: Hal Ashby's comedy is too dark and twisted for some, and occasionally oversteps its bounds, but there's no denying the film's warm humor and big heart.

Critics Consensus: Hal Ashby's comedy is too dark and twisted for some, and occasionally oversteps its bounds, but there's no denying the film's warm humor and big heart.

Critic Consensus: Hal Ashby's comedy is too dark and twisted for some, and occasionally oversteps its bounds, but there's no denying the film's warm humor and big heart.

Harold, the 20-year-old son of a wealthy, neglectful woman, tries to gain attention for himself with various hilariously staged "suicides." Obsessed with death, Harold meets a like-minded 79-year-old woman named Maude. Harold and Maude become inseparable friends, both helping each other out of various personal travails.

Jerry Randall
as (uncredited)
View All

News & Interviews for Harold and Maude

View All Harold and Maude News

Critic Reviews for Harold and Maude

The fact that [it] isn't very funny and, like its 80-year-old heroic, long outlives its necessary life, is less important than the fact that the characters frequently react gently or like credible human beings to the script's impossible notions.

Simpleminded, but it's fairly inoffensive, at least until Ashby lingers over the concentration-camp serial number tattooed on Gordon's arm. Some things are beyond the reach of whimsy.

It is most successful when it keeps to the tone of an insane fairystory set up at the beginning of the movie.

[Bud Cort and Ruth Gordon] both are so aggressive, so creepy and off-putting.

The visual style makes everyone look fresh from the Wax Museum, and all the movie lacks is a lot of day-old gardenias and lilies and roses in the lobby, filling the place with a cloying sweet smell. Nothing more to report today.

This black comedy pairs a 79-year-old swinger with a suicidal 20-year-old. They go to funerals and philosophize together in between Cort's humorously staged suicide attempts.

Exemplifies the expression "it shouldn't have worked, but it did" more than any movie I can think of, is a romantic comedy, and also a very dark comedy (50th anniversary)

The characters of Harold and Maude are its lifeblood; but the visual and auditory elements of the film tell its story just as well.

With far too many movies being incorrectly labeled as "cult films" these days -- I expect we'll reach a point where even blockbusters like Avengers: End Game and Jurassic World will be given that designation -- here's an example of the genuine article.

Essentially, no character in the film remains plain or unassuming; they're all overdone, exaggerated, and flamboyant - yet entirely believable.

A philosophical black comedy for grandparents and grandchildren, or what Walt Disney and Lucille Ball might have thought up if they'd taken courses in the Absurd at UCLA.

Bud Cort delivers one of the all-time cinematic expressions of existential horror.

Audience Reviews for Harold and Maude

A lovable film that continues to resonate for long after it is over and makes you wish it would never end - and the best about it is how the relationship between the characters evolves in such an honest way, with a lot of humor and melancholy to the sound of Cat Stevens' sweet songs.

A sublime, well-acted, surprisingly moving black comedy of a young man (Bud Cort) who is obsessed with death, and how he meets and falls in love with a 79-year old free-spirit (Ruth Gordon). What sounds creepy and boring is actually consistently funny and never uninteresting. Cort's disengaged stare and ghost-like appearance combined with Gordon's pig tails and high exuberance make for an unlikely pair to be sure, but it is still convincing despite being totally ridiculous. A little show in parts, but overall a phenomenal black comedy that rightfully has earned a cult following over the years.

A movie that talks about life and death by defying any possible norms one would set for oneself. And the movie still succeeds in being coherent and in sending ideas too precursor for its time. A masterpiece and a quite beautiful one as much as it is disturbing.