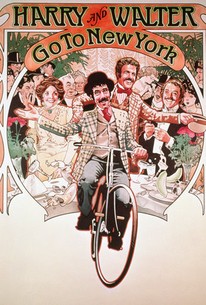 Harry and Walter Go to New York was born of the theory that, the more stars and money that you throw into a film, the better the film will be. The theory has seldom been proven true, and it certainly wasn't in this case. Harry (James Caan) and Walter (Elliot Gould) are a third-rate vaudeville team, playing tank towns in turn-of-the-century USA. Thrown into the hoosegow on a petty-theft charge, our heroes make the acquaintance of big-time crook Adam Worth (Michael Caine). Once they're sprung, Harry and Walter follow Worth to New York, with the intention of pulling off a huge bank robbery. Lissa Chestnut (Diane Keaton), a bird-brained suffragette, is also mixed up in the proceedings though she never seems certain of who or what her character is from one scene to the next. The film's one tangible asset is its meticulous re-creation of 1890s New York, courtesy of art director Harry Horner.

Michael Caine
as Adam Worth

Roger Til
as Waiter #1

Karen Powell
as Beauty #3
View All

Critic Reviews for Harry and Walter Go to New York

The movie never quite fulfills its promise. It has inspired moments, it's well photographed, Miss Keaton has some wonderfully fiery dialog as the radical editor, but somehow the direction and tone are just a little too muted.

As Adam Worth, Michael Caine is so wonderful that one wishes Harry and Walter had been scrapped altogether so the filmmakers could have made Adam Worth Goes to New York instead.

It's all heavy-handed and pointless, but enjoyable and well-paced.

If ever there was a more beautiful yet less funny comedy than Harry and Walter Go to New York, I'd like to see it. Or maybe I wouldn't.

Audience Reviews for Harry and Walter Go to New York

There are no featured audience reviews yet. Click the link below to see what others say about Harry and Walter Go to New York!