Harry Potter and the Goblet of Fire2005 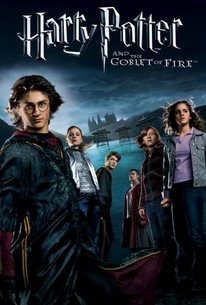 Critics Consensus: The main characters are maturing, and the filmmakers are likewise improving on their craft; vibrant special effects and assured performances add up to what is the most complex yet of the Harry Potter films.

Critics Consensus: The main characters are maturing, and the filmmakers are likewise improving on their craft; vibrant special effects and assured performances add up to what is the most complex yet of the Harry Potter films.

Critic Consensus: The main characters are maturing, and the filmmakers are likewise improving on their craft; vibrant special effects and assured performances add up to what is the most complex yet of the Harry Potter films.

Harry Potter and the Goblet of Fire Photos

Directed by Mike Newell, the fourth installment to the Harry Potter series finds Harry (Daniel Radcliffe) wondering why his legendary scar -- the famous result of a death curse gone wrong -- is aching in pain, and perhaps even causing mysterious visions. Before he can think too much about it, however, Harry boards the train to Hogwarts School of Witchcraft and Wizardry, where he will attend his fourth year of magical education. Shortly after his reunion with his best friends, Ron (Rupert Grint) and Hermione (Emma Watson), Harry is introduced to yet another Defense Against the Dark Arts teacher: the grizzled Mad-Eye Moody (Brendan Gleeson), a former dark wizard catcher who agreed to take on the infamous "DADA" professorship as a personal favor to Headmaster Dumbledore (Michael Gambon). Of course, Harry's wishes for an uneventful school year are almost immediately shattered when he is unexpectedly chosen, along with fellow student Cedric Diggory (Robert Pattinson), as Hogwarts' representative in the Tri-Wizard Tournament, which awards whoever completes three magical tasks the most skillfully with a thousand-galleon purse and the admiration of the international wizard community. As difficult as it is to deal with his schoolwork, friendships, and the tournament at the same time (not to mention his feelings toward the ever unfathomable Professor Snape (Alan Rickman), Harry doesn't realize that the most feared wizard in the world, Lord Voldemort, is anticipating the tournament, as well. ~ Tracie Cooper, Rovi

Critic Reviews for Harry Potter and the Goblet of Fire

Where Newell really scores is in taking a leaf out of Peter Jackson's book and cranking up the fear factor.

For those like me who are outside but sympathetic to the faith, it looks like another handsomely made, good-natured and high-spirited family movie, which is dramatically stymied through being locked within school grounds.

For the first time, adults might actually enjoy a Harry Potter film as much as children.

In its last third, The Goblet of Fire builds to a climax of such overpowering dread that you might just forget the rest. Harry grows up in an instant, and the film does, too.

...a woefully uneven installment that feels, for the most part, as though it should be a good hour shorter...

It's increasingly evident that seven books and as many as eight theatrical adaptations fuel the need for too much filler subplots or nonessential side characters.

More precious than a Golden Snitch in a game of Quidditch, this is one of the Must See films of the year.

For the first time, the stakes of this battle of good and evil become painfully evident.

It feels rushed and there are definitely the most plotholes in this entry in the series. Still, when it does work it really works.

Audience Reviews for Harry Potter and the Goblet of Fire

Newell does a great job condensing an enormous book so full of details, even if the film feels inevitably rushed, while the fantastic performances and first-rate technical aspects contribute for a story that is darker and more urgent than before as the characters reach adolescence.

A solid installment in the Harry Potter series. Exciting with incredible special effects. Competent acting by young'uns that have grown up in the films. (Spectarcular performance by Fiennes, even if only for a few brief moments!) The films really begin to hit their stride in this installment. (Too bad we had the Half-Blood Prince to cock it all up....)

Action packed and much, much darker, this installment introduces a whole lot of new characters and one in particular in its one-hell-of-an ending. Full review later.

Harry Potter and the Goblet of Fire Quotes