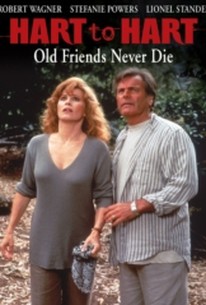 The moneyed, sophisticated Hartsdebonair Jonathan (Robert Wagner) and lovely wife Jennifer (Stefanie Powers)are in Hawaii at the private island paradise of a publisher (David Rasche) when Jennifer overhears two guests planning a murder. Jonathan learns it is his old friend Frank Crane (Mike Farrell), now a successful mystery writer, who claims the overheard plot was simply writing advice to another party guest. But when, at a masquerade party, a guest dressed like Jonathan is murdered, Jennifer insists it was an attempt on her husband's life. The police conclude that the death was suicide, but Jonathan suspects foul play. The Harts must deal with near-drowning, doctored drinks and a helicopter attack as they unravel a plot involving an old business rivalry and a hidden family connection.

There are no critic reviews yet for Hart to Hart: Old Friends Never Die. Keep checking Rotten Tomatoes for updates!

There are no featured reviews for Hart to Hart: Old Friends Never Die at this time.