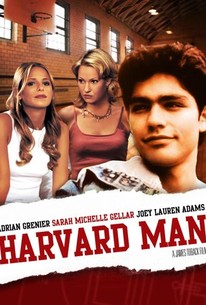 Director and screenwriter James Toback used his own experiences as a college student in the 1960s as the basis for this drama about a present-day student athlete who's bitten off more than he can chew. Alan Jensen (Adrian Grenier) is a college sophomore struggling to keep up with an unusually busy schedule -- while studying philosophy as a Harvard undergrad, he's also a point guard on the school's basketball team, and is juggling two girlfriends, cheerleader Cindy Bandolini (Sarah Michelle Gellar) and Chesney (Joey Lauren Adams), a professor ten years his senior. As Alan tries to stay on top of his classes and keep his love life sorted out, he receives some bad news from his parents -- a tornado has devastated their home, and they need $100,000 to rebuild. Alan wants to help his parents, and as it happens, Cindy's father is a Mafia boss tied in with a number of powerful bookies. Cindy uses her family's connection to put Alan in touch with Teddy (Eric Stoltz), a bookie who's willing to give Alan $100,000 in exchange for throwing a few games and shaving some points. Cindy also uses her dad's bankroll to place a quarter-million dollar bet on the upcoming Harvard-Dartmouth game, certain Alan can ensure a predictable outcome. But when the games don't go quite the way Alan expected, despite his best worst effort, he finds himself in dutch with the Mafia, while also attracting the attention of FBI agents who've been investigating Teddy and his associates. Amidst this chaos, Alan hops a jet home to give his parents the ill-gotten $100,000, and on the flight back decides to relax mid-flight by dropping a heroic dose of LSD, which turns out not to be one of his better ideas. Harvard Man was originally intended to star Leonardo DiCaprio as Alan, but after the project was put on hold in 1994, DiCaprio rocketed to fame in Titanic, which priced himself out of the project by the time James Toback was able to return to it years later. ~ Mark Deming, Rovi

Ayanna Sealey
as Coed No.1

Jamie Holmes
as Coed No.2

Al Franken
as Himself

Peter Mensah
as Cyril the Butler

The attempt is courageous, even if the result is wildly uneven.

For those who accept the offbeat premise, the film ultimately delivers a satisfying dramatic exploration of the ways we create ourselves.

What makes the movie work is that the premise, which sounds like a comedy, is treated with the seriousness of life and death.

A crisply made movie that is no more than mildly amusing.

I think it was Plato who said, 'I think, therefore I know better than to rush to the theatre for this one.'

A semi-autobiographical film that's so sloppily written and cast that you cannot believe anyone more central to the creation of Bugsy than the caterer had anything to do with it.

Might have been played as a glum cautionary tale, but in Toback's hands it becomes a lark--flashy, florid and blissfully over-the-top.

There's a certain niche audience that will eat up Harvard Man -- but whether that's the mob-movie set, the college-movie set, or the sex-movie set, I really have no idea.

Not all that good. I liked the actors but the characters were not likable and I ended up not caring what happened more and more as I watched it.

Lots of sex, deception and an adventurous storyline. Even if you don't like the plot, which involves a manipulative FBI investigation and a points-shaving scam, you'd enjoy the hilarious 'acid trip' scenes. Grenier, Adams and Stoltz are very convincing, yet there are a few pretentious actors who barely achieve a decent portrayal (Gayheart, Gellar, etc). Great direction, especially surrounding the schizophrenic acts where Alan's (Grenier) mind is galloping on a triple-heavy dose of LSD. Take my advice: Stay away from acid.

SMG fans will be dissapointed with this. A very odd film each which a student gets mixed up in trying to throw a basketball game in which to make money for himself and his mobster daughter, girlfriend.