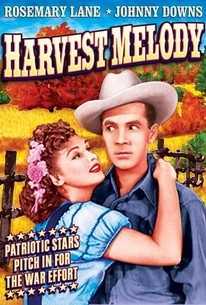 As PRC pictures go, the modest Harvest Melody is practically a spectacular. Rosemary Lane plays former film star Gilda Parker, who hopes to regain her popularity with a carefully staged publicity stunt. Aiming for the "rural" trade, Gilda goes to work on a farm at harvest time. At the behest of Gilda's fast-talking agent Chuck (Sheldon Leonard), several other show-bizzers begin pitching hay alongside our heroine. A little more altruistic than Gilda is farmer's son Tommy (Johnny Downs), who turns down a chance at a movie contract to devote his energies to the establishment of a patriotic National Farm Labor Club. But he doesn't turn down Gilda, allowing the film to end happily. Outside of its better-than-average cast, the most impressive aspect of Harvest Melody is the glittering new PRC logo at the beginning of the film.

Billy Nelson
as Canvas
View All

There are no critic reviews yet for Harvest Melody. Keep checking Rotten Tomatoes for updates!

There are no featured reviews for Harvest Melody at this time.