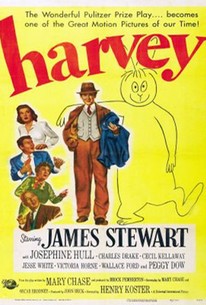 This whimsical fantasy about a local drunk's 6' 3 1/2" imaginary rabbit pal was a smash hit (and a Pulitzer Prize winner) on Broadway and was then adapted into this likeable farce that's also an allegory about tolerance. James Stewart stars as Elwood P. Dowd, a wealthy tippler whose sunny philosophy and inebriated antics are tolerated by most of the citizenry. That is, until Elwood begins claiming that he sees a "pooka" (a mischievous Irish spirit), which has taken the form of a man-sized bunny named Harvey. Although everyone is certain that Elwood has finally lost his mind, Harvey's presence begins to have magically positive effects on the townsfolk, with the exception of Elwood's own sister Veta (Josephine Hull), who, ironically, can also occasionally see Harvey. A snooty socialite, Veta is determined to marry off her daughter, Myrtle (Victoria Horne), to somebody equally respectable, and Elwood's lunacy is interfering. When Veta attempts to have Elwood committed to an insane asylum, however, the result is that she is accidentally admitted instead of her brother. Then the institution's director, Dr. Chumley (Cecil Kellaway), begins seeing Harvey, too. Hull, who reprised her part from the stage production, won an Oscar and a Golden Globe.

The charm of the play has been brought to the screen and all audiences should find it highly satisfying.

Unhappily, what the film also borrows from the play, and somehow makes more conspicuous, is a tendency to drag its feet for long stretches, especially during the virtually actionless last third of the story.

Great performances lifts this movie above its stilted script and production.

If you're for warm and gentle whimsey, for a charmingly fanciful farce and for a little touch of pathos anent the fateful evanescence of man's dreams, then the movie version of Harvey is definitely for you.

Charming, lightweight stuff (from a play by Mary Chase), so long as you can take Stewart's ingenuousness, but it does wear thin.

There's so many wonderful quotable quotes.

Elwood may be a drunk (or not -- does he ever actually take a drink?), and he may be delusional, but he is also happier, less neurotic, and more content than the so-called normal people who surround him and claim to be looking out for his best interests.

Stewart's Elwood P. Dowd is a soft-spoken philosopher and a friend to all -- he's quite disarming, and so is this movie.

A modest family film that lays on the sweetness a bit to heavily.

This is a happy movie and leaves a long, lingering warm glow.

This sweet movie is adorable like James Stewart's character, who charms us distributing business cards and being nice to everyone that he meets, while Josephine Hull deserved the Oscar she won for her hilarious, on-the-edge-of-hysteria performance.

Jimmy Stewart is brilliant as Elwood P. Dowd in this great moral tale that will leave you feeling all warm and fuzzy.

An infectiously nice/insane main character played brilliantly by James Stewart, a great skeptical reflection of the audience portrayed by Josephine Hull, and a great story make this movie one of a kind. It is funny, nice and has a wonderful moral.