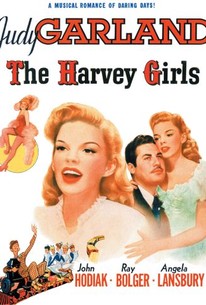 This glorified Technicolor commercial for the Fred Harvey restaurants stars Judy Garland as a 19th-century mail-order bride. Upon arriving in New Mexico, Garland discovers that her husband-to-be is the town drunk. She cuts her losses and takes a job at the local Harvey restaurant, an establishment which endeavors to bring a little civilization and class to the wide open spaces. Harvey's operation is challenged by saloon-owner John Hodiak, corrupt-judge Preston S. Foster, and local-madam Angela Lansbury. With the help of tenderfoot Ray Bolger, Garland and her fellow waitresses foil the corrupt elements in town. Prominent in the supporting cast are Cyd Charisse, Marjorie Main, Chill Wills, Kenny Baker and Virginia O'Brien (whose musical numbers aren't quite as rambunctious as the contributions of the others, mainly because O'Brien was pregnant during filming). The songs are for the most part perfunctory, with the spectacular exception of the Harry Warren and Johnny Mercer's Oscar-winning "Atchison, Topeka and the Santa Fe." The Harvey Girls is tenuously based on a more sober-sided historical volume by Samuel Hopkins Adams.

Dallas Worth
as Dance Hall Girl

Critic Reviews for The Harvey Girls

An ebullient musical with a unique premise.

Garland shines as always, but it's Lansbury who steals the show, bringing emotional shading to a character that could have easily been one dimensional.

George Sidney's musical western is a joyous, fictionalized tribute to the New England femmes who went out West to bring culture and food; best song is On the Atchison, Topeka, Santa Fe, which won an Oscar.

Though this creaky musical hasn't aged well, its peak moments are delightful: Dorothy and her Scarecrow reunited, "On the Atchison Topeka and the Santa Fe" and Garland's gift for physical comedy.

Not quite top line Garland, but very much fun with a good score.

Perhaps not a musical for the ages, but a larkish and exuberant joy all the same.

One classic song does not a good musical make

The story and songs are reminders of a gentler, more innocent age that clearly never existed but was fun imagining in the movies.

Audience Reviews for The Harvey Girls

Glossy Hollywood musical where cowboys and waitresses wear Technicolor outfits that look like they rarely encounter dust. The great performances and musical numbers carry you away to this imaginary place for a couple hours of enjoyable entertainment though. Ray Bolger and Judy Garland re-team, though they don't share many scenes. Bolger provides comic relief, but especially captures the screen with his trademark style of dance. Garland commits to film more tunes that she enlivens with her unique voice and ability to add sensitivity.

A fun, but predictable musical comedy.

My love of life, JUDY!