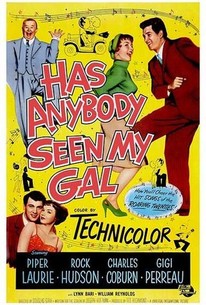 Has Anybody Seen My Gal? Photos

Douglas Sirk directed this frothy musical comedy set in the 1920s starring Charles Coburn as Samuel Fulton, an elderly man with a multi-million dollar fortune. With no family of his own to whom he can leave his money, Fulton is pondering what to do with his estate. Years ago, he was in love with a woman named Harriet, whom he asked to marry. She turned him down and married another someone else, but he's still fond of her and considers leaving his millions to her family. However, Fulton decides to first give them a test. Posing as an eccentric and threadbare artist, he rents a room from Harriet (Lynn Bari) and her husband Charles (Larry Gates). He then arranges for an anonymous gift of $100,000 to be presented to them so that he can watch their reactions. Sadly, things don't go well; Harriet browbeats the rest of the family into moving into a mansion and tries to convince her daughter Millicent (Piper Laurie) to break up with her boyfriend, poor but good-hearted soda jerk Dan (Rock Hudson), in favor of a wealthier and more socially prominent man. Songs include "Tiger Rag," "When the Red, Red Robin Comes Bob-Bob-Bobbin' Along," "It Ain't Gonna Rain No More," and "Gimme a Little Kiss, Will Ya, Huh?" James Dean has a tiny part as a customer at the soda fountain; it was his first appearance onscreen.

Critic Reviews for Has Anybody Seen My Gal?

As good as it gets when it comes to "feel-good" sitcom comedies.

Audience Reviews for Has Anybody Seen My Gal?

Charming comedy of millionaire Charles Coburn checking out family of a lost love and innocently wrecking havoc in their lives. He is really the whole show but the sets and costumes are pretty and the rest of the cast engaging even if they are given nothing to do. This is typical of the type of role Piper Laurie was wasted in before getting a chance to show what a fine actress she is.

Has Anybody Seen My Gal? Quotes