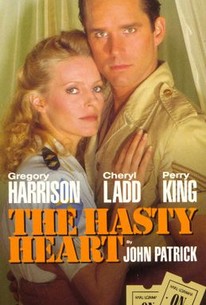 Previously filmed in 1950, John Patrick's play The Hasty Heart was restaged 33 years later as a cable-TV special. Set in a British military hospital in 1944 Burma, Patrick's story concentrates on three people: dedicated Red Cross nurse Sister Margaret, insouciant American officer "Yank," and a bitter, standoffish Scottish soldier. Deliberately inflicting his "porcupine disposition" on his fellow patients, the Scot can't understand why everyone is suddenly being so nice to him. The audience, however, knows what Sister Margaret and the other patients know: the Scot has only a few months to live. Gregory Harrison and Perry King deliver well-rounded performances as The Scot and The Yank, but both are outshone by Cheryl Ladd, who is excellent in the difficult role of Sister Margaret. The Hasty Heart was originally offered in a 150-minute time slot over the Showtime Cable service on September 12, 1983.

There are no critic reviews yet for Hasty Heart. Keep checking Rotten Tomatoes for updates!

There are no featured reviews for Hasty Heart at this time.