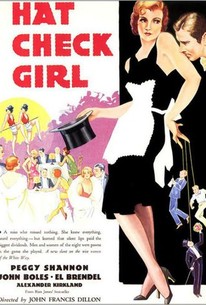 Based on a novel by Rian James, Hat Check Girl stars Sally Eilers as the title character, a pert little number named Gerry Marsh. Despite her lowly station in life, Gerry manages to fall in love with millionaire playboy Buster Collins (Ben Lyon). The fly in the ointment is blackmailing newspaper columnist Tod Reese (Monroe Owsley), who is killed by one of his many victims. Since Buster had been targeted for persecution by Reese, he finds himself the leading suspect, obliging Gerry to play detective to solve the mystery. Ginger Rogers, still a year or so removed from full stardom, steals the show as Gerry's wise-lipped best friend.

Betty Elliott
as A party guest

Astrid Allwyn
as A party guest

Bert Roach
as A party guest

Greta Granstedt
as A party guest

Arthur Houseman
as A party guest

Lee Moran
as Man on Subway

It is, undoubtedly, cleverly photographed, well staged and competently acted, but the story if of that familiar brand in which the director scorns to include any suspense.

There are no featured reviews for Hat Check Girl at this time.