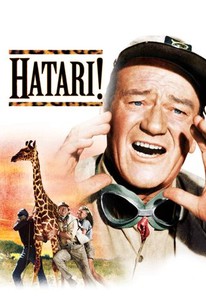 Hatari! is Swahili for "danger"--and also the word for action, adventure and broad comedy in this two-fisted Howard Hawks effort. John Wayne stars as the head of a daring Tanganyka-based group which captures wild animals on behalf of the world's zoos. Hardy Kruger, Gérard Blain and Red Buttons are members of Wayne's men-only contingent, all of whom are reduced to jello when the curvaceous Elsa Martinelli enters the scene. In tried and true Howard Hawks fashion, Martinelli quickly becomes "one of the guys," though Wayne apparently can't say two words to her without sparking an argument. The second half of this amazingly long (159 minute) film concerns the care and maintenance of a baby elephant; the barely credible finale is devoted to a comic pachyderm stampede down an urban African street, ending literally at the foot of Martinelli's bed. The other scene worth mentioning involves comedy-relief Red Buttons' efforts to create a fireworks-powered animal trap. Not to be taken seriously for a minute, Hatari is attractively packaged and neatly tied up with a danceable-pranceable theme song by Henry Mancini. ~ Hal Erickson, Rovi

Sam Harris
as Man in the Store

That Hataril, for all its elements of self-parody, is never downright dispiriting is largely due to Hawks' tireless flair for buoyant comedy.

Politics take a back seat to sex, served up in a dazzling wealth of innuendo.

The strapping physique of the film unhappily emphasizes the anemic condition of the story streaming within.

This late masterpiece (1962) by Howard Hawks transcends every literary value in the book to become a brilliantly entertaining and insightful work of pure cinema.

All in all, one of those rare films that genuinely constitutes a 'late masterpiece'.

Perhaps the accent on the trapping of free-roaming critters for use in zoos is a mite too heavy, but this aspect of African business rates the attention it receives here.

It is filmed with every possible cliché, and the romantic-comedy situations barge towards their targets with the delicacy of a rhino hurling itself at its dinner.

All dumb romance, immature jokes, (unconscious?) racism and a child's sense of adventure.

The story is nothing more than a poor excuse for what Hawks really seems to be interested in presenting--big-game chases over the Kenyan veldt. These sequences are so well done that they save this otherwise-tepid film.

A plotless (and interminable) travelogue that seems more like a cheap excuse for Hawks to spend vacation in Africa, and it is hard to empathize with hunters working to catch animals for zoos (I was rooting for the rhinos) but at least the characters are charismatic (despite the casual sexism).

Howard Hawk's classic safari adventure may be set in Africa and have plenty of huge scenes of men in cars chasing down animals. If you take that away, it is basically a romantic comedy, though. It is highly amusing to see what men turn into when a new female enters their territory and the little fights that causes. The lovable characters and light-hearted mood of the film make for a very entertaining experience. While the action sequence of the animal hunts do get a bit repetitive, they are still impressively filmed, look and feel real without a lot of special effect that'd probably be used today. The film easily could have been 15 minutes shorter, but it's still a lovable and charming experience to spend two hours with that crew of characters.

I'd like to see a lot more John Wayne movies in the future, but for now this is the only one I know I've seen right off the bat, and I enjoyed it a lot. It has a sort of love story to it, but the parts I remember most are when Wayne and the others are chasing a bunch of animals. It's like a fast-paced African safari!

Great film, still enjoyable, with a fine blend of action, romance, and comedy with John wayne in Africa for zoo-supplying animal hunting. And Red Buttons is so funny guy.