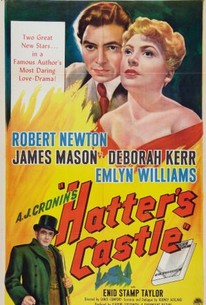 Paramount Pictures' British division was responsible for this adaptation of A.J. Cronin's novel Hatter's Castle. Robert Newton is appropriately mean-spirited as an 1890s hatter, James Brodie, who is anxious to claw his way up from poverty. Desperate to make himself socially acceptable as his income increases, Brodie proceeds to make life miserable for those closest to him: his wife (Beatrice Varley) and daughter (Deborah Kerr). For all his blinkered social climbing, Brodie can never truly escape his true station in life -- a moral better suited to the class-conscious British audiences than the equal-opportunity Americans. Hatter's Castle was well distributed in the U.S. through Paramount's intimidatingly efficient studio-owned theater circuit.

Aubrey Mallalieu
as Clergyman
View All