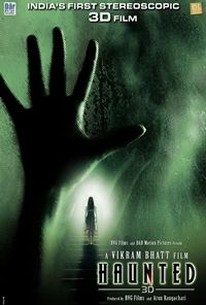 India's first stereoscopic 3D horror film, Vikram Bhatt's Haunted 3D tells the tale of a man who falls in love with an otherworldly presence while attempting to complete the sale of a sprawling country manor. Glen Manor is a place with a dark secret. Rehan knows this, but he also realizes that a successful sale would mean the deal of a lifetime. When Rehan begins investigating the strange occurrences that plague the hallways of Glen Manor, emotions are stirred that he never knew existed. Now, as Rehan endeavors to close the sale his father initiated, he finds himself delving deep into the history of the cursed residence, and using the power of love to combat the tragedies of the past.

The only new thing about Haunted is that it is Bollywood horror in 3 D. The rest of it, by which we mean the principal stuff that makes it a film are all same old same old.

There are no featured reviews for Haunted 3D at this time.