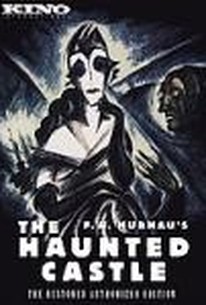 The German The Haunted Castle (Schloss Vogelrod) has been described as director F.W. Murnau's "warm-up" for his subsequent Nosferatu. At this point in his career, Murnau was more interested in effects than in story or characterization, but those effects were among the best within the boundaries of Germany's "Caligari School." The cast included Paul Hartmann, Arnold Korff, Paul Bildt and Olga Tschenova. ~ Hal Erickson, Rovi

Hermann Vallentin
as Landgerichtsrat a. D.

A murder-mystery potboiler juiced by a couple brief dream sequences, one frightening and one comedic.

It's certainly beautiful - Murnau crafts some of his most strikingly lovely shots here , but the film's narrative is often left spinning its wheels.

[This] film is very much like being trapped at a party where no one is enjoying himself; all you can do is sit there, looking at the clock and imagining how soon you can make an excuse to get away.

Once we get past the fact that this is not Nosferatu, it has its own share of striking moments.

I was so confused by this movie, but I think it's partly the fault of the people who tried to restore it, it doesn't look so good. The actors weren't very good either, the story is odd, and there wasn't much to look at. This looks like it could have been an interesting movie at least, but it needs to be restored better.