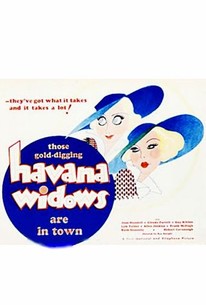 The wonderful Warner Bros. stock company goes through its customarily breezy paces in Havana Widows. Joan Blondell and Glenda Farrell star as Mae and Sadie, a couple of hard-boiled dames who support themselves by shaking down wealthy and susceptible older men in Havana. Their current target is Deacon Jones (Guy Kibbee), a self-appointed moralist whose rock-ribbed values disappear after the third drink. But Blondell spoils the scam when she falls in love with the Deacon's son Bob (Lyle Talbot). Less than a month after the release of Havana Widows, many of the same cast members were back to their old tricks in Convention City.

Garry Owen
as Wheelman
View All

For an evening of real fun that will banish troubles, you can't go wrong on this.

Gee what do you know, another film from the 1930â(TM)s about women who are gold-diggers. This one is for Joan Blondell and Glenda Farrell fans only â" theyâ(TM)re charming, and seeing Blondell in a variety of eye catching outfits was probably the only real highlight. The script is weak and not all that funny, including a couple of perpetually drunk male characters who get annoying quickly, and various flailing such as a chase through a hen house. Thin on charm, but mercifully short at just 62 minutes.