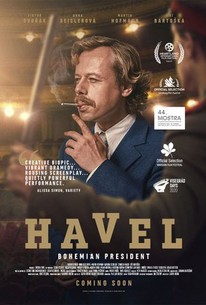 When Soviet Russia invades Czechoslovakia and tarnishes its short-lived liberation, Vaclav Havel must wrestle with not only the new political obstacles threatening his livelihood, but also his own identity as accomplished playwright. Over the course of the following two decades, Havel risks it all in the name of freedom and revolution, spearheading a formidable resistance movement while facing the constant threat of imprisonment or death. Despite paying a heavy price for his involvements, Havel rises from the ashes to astonishing political heights and becoming the first president of the new Czech Republic. More than a simple biopic, Havel is a deep dive into the inner workings of Havel's psyche and conscience, his doubts and inspirations, his sensitivities and weaknesses. It is infused with his irreverent theatricality, his penchant for the absurd, and his profound understanding of human nature. It is a portrait of one man's evolution and the revolution that followed.

"Havel" doesn't let pesky facts get in the way of a good story.

An enjoyable film that breaks from the traditional mold of what we in the west have come to expect from a biopic.

Dvorák is well cast in the central role, couching Havel's charm and general enthusiasm with an air of uncertainty, especially when he faces tough choices and the loss of his freedom.

There are no featured reviews for Havel at this time.