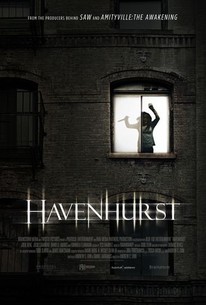 Welcome to Havenhurst, a gothic apartment complex in the heart of New York City's historic Tudor City district. A beautifully maintained, turn-of-the-century building that houses over 3,000 residents... and countless dark secrets. The rent is what you can afford and the rules are simple: live a good and decent life and you can stay forever. Break the rules and... Jackie (Julie Benz), a troubled young woman with an unyielding alcohol addiction, is released from rehab and given a second chance with a new job and a furnished apartment at Havenhurst. Guilt-ridden over the tragic loss of her 8-year-old daughter, Jackie is quickly drawn into the mysteries of Havenhurst, in particular the unsolved disappearance of the apartment's previous occupant, a young woman (Danielle Harris) she befriended in rehab who disappeared recently without a trace. Aided by a hardened New York police detective (Josh Stamberg) and a lonely foster child (Belle Shouse) who lives under the shadow of her caretakers' sadistic whims, Jackie must not only battle her inner demons... but the very real ones that live deep within the walls of Havenhurst.

Douglas Tait
as Jed
View All

Despite the strong efforts of everyone involved, Havenhurst proves all too unimaginative in its formulaic recycling of genre tropes.

"Havenhurst" never has as much fun with its premise as it should, and it peaks before its final scenes.

Never quite finds a distinctive narrative slant or atmosphere of its own. Nonetheless, director-co-scenarist Andrew C. Erin's film will pass the time tolerably enough for genre fans.

Havenhurst evokes some dread, but it's ultimately basic-model horror, without the proper planning to make it anything more.

The only real horror of Havenhurst is that someone got this much budget for a film without a script.

It's at best, a mediocre genre entry as everything feels very low stakes, and nothing is ever logically resolved or given a satisfying conclusion.

Like the building at its core, the bones are strong but the flesh hanging from them is weak and sickly.

Havenhurst is a tight, tense and claustrophobic thriller that's held together by some perfectly-pitched performances.

A tricky house-of-horrors where once you check in, you never check out-no matter how badly the viewer will want to.

A boring movie where the absurdity adds to the grotesque scenes in the search to discover Evil. [Full review in Spanish]

The only consistency in this film are the jumpscares from the soundtrack, which eventually become the most irritating thing. [Full review in Spanish]

You know, sometimes you just can't get what you want. No matter what you do, sometimes the things that you want or ask for cannot be attained. For example, I probably, like every other 16-year-old, at the time, I wanted a brand-new car. Of course, my mother could not afford it at the time and I never held it against her, I mean why the fuck would I, right? It was just something I wish I could have, not something I asked for. I'm sure you've had similar experiences, whether it's with material objects or even pining for an individual. And one of the things that I wanted was for this movie to be good. Silly me, for having such a ludicrous request. And it's not like I had a vested interest in this being good or anything of the sort, I didn't really even know of this film until I saw it just a couple of days ago on Netflix. But I always like to go into movies expecting them to be good. Perhaps that's the wrong way to describe it, but I can't go in expecting to hate it because then, of course, I'd hate it. It'd be better to go in with no real expectations but, of the two, I'd rather go in wanting it to be good than going in expecting it to suck. I can't say that this movie sucked in the conventional sense, it wasn't ridiculously dumb or anything of the sort, though I can see how some might see it that way. It was just a bad movie simply because of the fact that it was a little boring and I really couldn't get into the concept or the characters. Granted, the latter isn't really relevant in a film such as this, even though it should be, but I think there's an interesting enough concept that they could have played with. The film tells this story of this recovering alcoholic who rents an apartment in this building for people specifically like her, people recovering from whatever vices they may have had in the past. One of her friends used to live in this building, except she's been missing for a while now. This woman, Jamie, decides to investigate as there have been several mysterious disappearances during her stay in her apartment. That's not the interesting part, of course. If the film had dealt with that, conceptually speaking, it would have been like many other horror movies before it. The interesting part comes in the fact that the proprietor of this building, Eleanor Mudgett, is, in fact, related to H.H Holmes and the building she owns was used by Mr. Holmes to carry out his atrocities. This is why there are hidden passageways and trapdoors all over the building. Basically, the tenants are horrifyingly murdered if they relapse and give in to their vices and whatnot. The problem I have with this H.H Holmes angle is the fact that it, literally, is there just for the shock value of the actual reveal. It doesn't actually serve to benefit the characters or the narrative. It's not necessary, like, at all. You could have found another way to explain why the building has hidden passageways and trap doors, just say that this family is really intent on making sure that their tenants follow the strict rules that are set for them. And that's another thing, I don't get why Eleanor and her sons, one of whom who looks like Powder (this isn't explained at all), had to go as far as they did. I mean I get why they did, but the film just offers a really shitty explanation for why they do so. If they had explored the family dynamics more, you might have gotten a little more detail on why they are the way they are. Their contempt for people with vices (wasters of life as they say) just isn't enough reason for me to buy into their murderous ways. I can buy it in the case of pedophiles, but not necessarily in the case of alcoholics, drug addicts or gamblers. But I digress. Another problem is the fact that the movie, in spite of a decent enough concept, doesn't play out like anything more than a glorified slasher. And it's not even like the gore is even that good to begin with, it's just there. The acting is fine, Fionnula Flanagan is always great, but she isn't in the film enough to make a real difference. No one else really stands out in any tangible way, most of the actors are just bodies for the film to consume, no personality, no interesting traits, nothing. So, yea, I wasn't exactly the biggest fan of this movie. Again, it's not a horrifyingly bad movie, it's more boring than it is bad. But the 1.5 star rating still stands, this is just not a very good movie. A boring movie, to me, is at least watchable and I can't say that this is that. As if it wasn't obvious, I can't exactly recommend this movie.