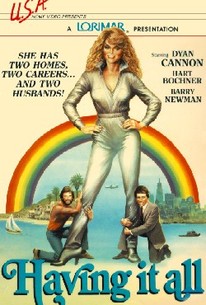 Having It All is a tailored-for-television attempt at "screwball" comedy from the director of About Last Night... and Glory. Dyan Cannon plays a fashion designer who believes that all good things come in pairs. She not only has two different clothing lines in two different cities (New York and LA), but also has two different husbands. Husband #1, Barry Newman, is a straight-arrow type in New York, while husband #2, Hart Bochner, is a laid-back Californian. Adapted by Ann Beckett from a story by Elizabeth Gill, Having It All first aired on October 13, 1982.

Thomas Murphy
as Nearby Guest

Critic Reviews for Having It All

There are no critic reviews yet for Having It All. Keep checking Rotten Tomatoes for updates!

Audience Reviews for Having It All

Sprightly comedy with Dyan finding herself with the dilemma of two husbands in two different cities. Silly premise but the game cast carries it off with brio.

Having It All Quotes