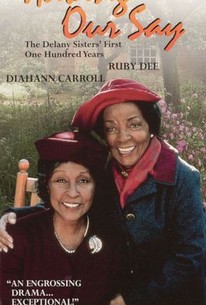 Based on the best-selling book by Sarah L. Delany and A. Elizabeth Delany with Amy Hill Hearth, which was later adapted into a Broadway play, Having Our Say tells the true story of the Delany Sisters, two African-American women who were fathered by a former slave, went on to attend college, and witnessed the slow but steady advance of civil rights in America before a reporter for The New York Times sat down with them to record their story. In the film version, 103-year-old Sadie (Diahann Carroll) is a polite and soft-spoken woman who deals cheerfully with the questions of journalist Amy Hill Hearth (Amy Madigan). Sadie's considerably more feisty 101-year-old sister (and housemate) Bessie (Ruby Dee) grumbles about "white people who ask you to explain the obvious to them," but soon adds her own stories as the Delanys discuss their quietly remarkable lives as career women and racial pioneers who not only survived Jim Crow laws, they outlived Jim Crow, as well. Produced for CBS Television, Having Our Say was first aired April 18, 1999. Incidentally, Bessie Delany died in 1995 at age 104, while Sadie, at 110, passed on in 1999, only a few months before this was first aired.

Lisa Arrindell
as Sadie in her 20s

Audra McDonald
as Bessie in her 20s

Kiara Harris
as Sadie at 7

Haleigh Porter
as Bessie at 5

Critic Reviews for Having Our Say: Delany Sisters' First 100 Years

There are no critic reviews yet for Having Our Say: Delany Sisters' First 100 Years. Keep checking Rotten Tomatoes for updates!

There are no featured reviews for Having Our Say: Delany Sisters' First 100 Years at this time.