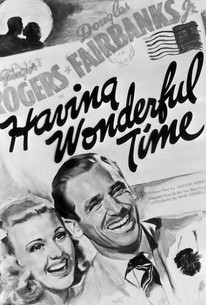 A young woman heads for New York's beautiful Catskills for a fun summer of much needed rest and relaxation and instead finds true romance in this lively comedy. The story is based on Arthur Kober's popular Yiddish play, that was originally a satire of New York Jewish people, but thanks to the WASP-oriented Hays code, much of the original humor was cut or sanitized to appeal to Gentile sensibilities. The film marks the film debut of beloved comedian Red Skelton.

Critic Reviews for Having Wonderful Time

Loses some of its colorful Borscht Belt flavor, but the star power of Ginger Rogers keeps it diverting.

There are no featured reviews for Having Wonderful Time at this time.