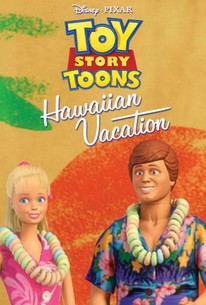 Originally released into theaters to accompany Cars 2, the Toy Story short Hawaiian Vacation finds Woody (voice of Tom Hanks), Buzz (voice of Tim Allen), and the rest of Bonnie's new toys planning an unforgettable Hawaiian getaway for their glamorous pals Ken (voice of Michael Keaton) and Barbie (voice of Jodi Benson). When Ken's vacation plans hit an unforeseen snag, his devoted pals hatch a plan to give the well-dressed doll and his adoring girlfriend the ultimate staycation from the comfort of Bonnie's bedroom.

Joan Cusack
as Jessie the Cowgirl

Bonnie Hunt
as Dolly
View All

There are no critic reviews yet for Hawaiian Vacation. Keep checking Rotten Tomatoes for updates!

This is a great Pixar animated short film and really great to see the cast from the Toy Story previous films again. Woody and his gang's new owner is going on a vacation to Hawaii and Barbie and Ken stow away fro a romantic vacation of their own, only to discover that the girl is not taking her school backpack. Woody and his gang mock up a vacation for them and the gags are funny, in character and unexpected.